Athena SWAN is alive and well at Queen Mary

Queen Mary, University of London has retained its Athena SWAN Bronze award for promoting gender equality and excellence in recruiting and progressing women in science, engineering and technology (SET). 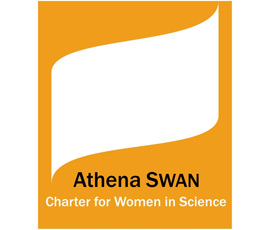 The College is one of only 47 higher education institutions in the UK to have received the award, which recognises the number and position of women academics, positive support for women at key career transition points, culture and gender balance in decision making and work-life balance practices across the entire institution.

"The issue of gender equality is clearly very much alive in the university," the award judges commented, with Queen Mary showing "progress, awareness and commitment" at the highest level.

Successful initiatives noted by the judges include the increasingly popular Women in Science and Engineering (WISE@QMUL) social and discussion group for students and staff and the Women@QM project, which in 2007-2008 celebrated the current and historical achievements of women working at Queen Mary.

On hearing the news, College Principal Professor Simon Gaskell, said: "It is excellent that Queen Mary has successfully renewed its Athena SWAN award. We are proud to reconfirm our full support and commitment to the scheme and celebrate our long-standing contribution and achievement of women in science, engineering and technology."

Queen Mary was first awarded the Athena SWAN Bronze Award in 2007, in recognition of its attitude towards gender equality in the academic sector. In 2010, the award judging panel were "very happy" with the way initiatives supporting the career progression of women in SET had progressed since 2007. They were "particularly delighted" to see the establishment of a flexible working policy with no restrictions on the reasons for a request being made.

David Ruebain, chief executive of ECU congratulated the award winners at a ceremony this week, saying: "I am delighted that so many higher education institutions and SET departments have achieved Athena SWAN Awards this year. It is not easy to meet the criteria, so these awards are a testament to the hard work and commitment of the sector to promoting the career progression of female academics and researchers."

He continued: "The methodology of Athena SWAN has proven to be transformative and I congratulate the winners for leading the way in encouraging women into science at a time when only 5.3% of working women are working in science, engineering and technology. Not only does this work enrich the careers of individuals, it helps institutions to harness the talents of a diverse workforce."

Universities subscribing to the Athena SWAN Charter – funded jointly by the UK Resource Centre for Women in Science, Engineering and Technology (UKRC) and Equality Challenge Unit – are eligible for the SWAN awards, which assess UK universities in their role as science employers and mark their progress. Bronze awards are given to institutions that support female staff and students and Silver awards are given to individual departments that demonstrate substantial progress in attracting women and improving their career prospects.

"The next steps will be to continue to promote SET by outreach to schools and through external events," said Bertille Calinaud, Diversity Specialist in Queen Mary's Human Resources department. "The Department of Physics is already working towards Juno practitioner status and a submission for a Silver award in the School of Medicine and Dentistry will be prepared."