Innovation at Queen Mary, University of London has been rewarded again, with a top prize in the PraxisUnico Impact Awards for spin-out company ApaTech. 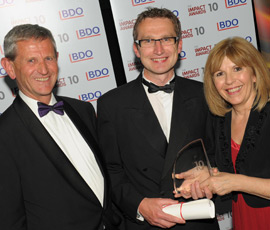 ApaTech was recognised in the "Business Impact - Achieved" category, which recognises projects that have made an outstanding business impact through successful knowledge transfer, where the impact can be quantified and measured.
Speaking at the award ceremony, BBC technology commentator Maggie Philbin said, "These finalists showcase just some of the examples of great British innovation and we need to be better at shouting about our successes."

Established at Queen Mary’s Interdisciplinary Research Centre in Biomedical Materials nine years ago with an initial investment of £3 million (3i) to manufacture and market synthetic bone substitutes, ApaTech has become an excellent example of how innovative technology from a UK university can be developed and commercialised on a global scale.

The company was acquired this year by global healthcare company Baxter International Inc. for total consideration of up to $330 million, following a number of successful venture capital investment rounds which underpinned significant expansion of the business including new manufacturing capacity, and enabled the company to continue the development of its lead products.

Simon Cartmell, former-Chief Executive Officer of ApaTech, said: "This award recognises our delivery on the promise of our technology and its huge commercial success and impact on society. It is a great tribute to the success of our scientific leadership and the dedication of our people."

In 2009 ApaTech was ranked number two in the Sunday Times Tech Track 100 Fastest Growing Private Medical Technology Companies listing and received a number of awards including North America Device Biologics Company of the Year at the Frost & Sullivan Excellence in Medical Technologies and Life Sciences Conference 2009 in recognition of its outstanding commercial success in the US orthobiologics market.  In 2008 ApaTech received the Research and Development Award at the Tech Track awards ceremony in London, in recognition of the innovative and ground breaking research which has underpinned the successful growth of the company. ApaTech also won the Business Initiative Award at The Times Higher Education Supplement awards in 2007.

Graeme Brown, Director of Technology Transfer at QMI said "ApaTech is the perfect university spin-out success story. This award reinforces just how much can be achieved in a relatively short time-frame when innovative scientists join together with top-class commercial leadership. Furthermore, ApaTech’s main product ACTIFUSE is being used by surgeons in more than 30 countries around the World. Congratulations to the founding inventor, Professor William Bonfield and all those involved at Queen Mary and ApaTech in this outstanding result."