School placements help to sell the language of business

British businesses claim to lose billions of pounds a year because so few employees are multi-lingual. A government decision to take foreign languages off the secondary school compulsory curriculum has not helped. 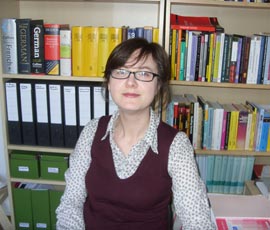 However, the Department of German at Queen Mary, University of London is now providing students with primary teaching placements to foster an interest in languages among the very young. It is the first scheme of its kind nationally.

“If fewer language GCSEs and A-Levels are taken, we worry that ultimately our student intake will drop,” explained Dr Sylvia Jaworska, who is behind the new scheme. “Our hope is to encourage children to take up languages early and then, as graduates, to consider becoming language teachers.”

The current government language strategy, introduced in 2004, has shifted teaching focus from secondary to primary education, but without systematic provision of either resources or specially trained teachers.

So, as part of the semester-long course, third-year students are introduced to applied linguistics, studying how foreign languages are learnt, particularly at a young age. They then complete a six-week placement at the Olga Primary School in Tower Hamlets, teaching German to children aged six and seven, and nine and ten.

“At primary age German should be a fun experience so, for an hour a week, we do a lot of creative activities, mainly with music and performance,” explained Dr Jaworska.

“Many local children here are bilingual; they speak Bengali, Hindi, which makes it easy to pick up another language; it is amazing how quickly they learn new words and phrases.”

“For languages not to be obligatory is unique to English-speaking countries; most European secondary schools ensure they are taught up to 18 years,” notes Dr Jaworska, who speaks German, Polish, English and French.

“In the UK languages are viewed as difficult subjects,” she added. ”Worryingly, some state secondary schools don’t push students to take them, because they think it might affect their league tables. It’s short-sighted considering additional languages offer a competitive edge in the jobs market.”

A substantial number of the Department of German’s graduates take up teaching - nationally the rate is 20 per cent - so the course is specially designed to prepare them for the classroom. The nine students currently taking the semester-long module finish their placements on 31 March.

“We started the course last year, and it is good to know many of those graduates are now on PGCE teacher training courses,” said Dr Jaworska.

Such is the popularity among students that the School of Languages, Linguistics and Film plans to expand the scheme, getting more schools involved, to provide placements for those studying French and Spanish degrees in the coming years. There has also been considerable interest from other universities, such as Cambridge and Bristol, keen to follow suit.