A historian at Queen Mary, University of London is to star in a brand new three-part series about extraordinary stories behind maps, starting on BBC Four this Sunday (18 April 2010). 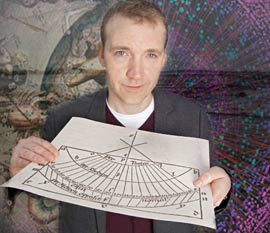 As series presenter of Maps: Power, Plunder and Possession, Jerry Brotton, Professor of Renaissance Studies in the Department of English, travels the globe on a historic journey of discovery about cartography.

In the first of three fascinating hour-long episodes, Professor Brotton reveals how maps do not just get us from A to B, they are also a snapshot of defining moments in time and tools of political power and persuasion.

He visits the world’s first known map, etched into the rocks of a remote alpine hillside 3000 years ago, before viewing Henry VIII’s stunning maps of the British coastline, which were used to exert control over the world.

The show moves on to Cassini’s quest to map the world with greater scientific accuracy, which led also to the British Ordnance Survey. In contrast, Jerry highlights the alternative approach taken by Polynesian sailors.

The next episode explores how maps can tell a deeper truth about society; the fears, obsessions and prejudices of their age. Professor Brotton takes a revealing look at demographic charts of Jewish immigrants in the East End. They expose Victorian social obsessions with race, poverty and disease.

Later, in Zurich, Jerry talks to Google Earth about the cutting edge of cartography. He also meets Professor Danny Dorling whose 21st-century Worldmapper Project illustrates issues such as infant mortality and HIV prevalence on a series of shifting maps of the world.