A major new project dealing with conflict and the peace process was launched last Friday at a packed event in Dundalk Institute of Technology. 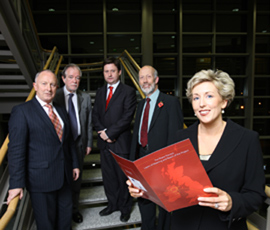 Key figures from across the political and cultural spectrum joined academics, diplomats, commentators, clergy, community groups and representatives of the victims sector to learn about the three-year initiative led by researchers at Queen Mary, University of London.

The project, which is funded through the European Union’s PEACE III Programme, has two major components. The first is to locate and record around 100 heritage interviews with key figures in peace and reconciliation over the last forty and more years.

Interviews will be sought in Ireland, North and South, as well as Britain, the US and elsewhere.  Capturing testimony on the most traumatic and significant events in Anglo-Irish history, the project aims to avert a major loss to national heritage and to preserve voices that will speak across the generations.

These accounts will be held under embargo for 40 years but, with the participants’ permission, some of the material will be used for a book and other publications on conflict resolution.

The other major aim is to establish an oral history training programme across the border area.  This will equip community representatives, trainers and teachers with the necessary skills to initiate, fund and complete such work at ground level.

The project directors have pledged to oversee to completion three exemplary cross-community projects.  The recollections of everyman and everywoman will balance and give context to the 100 heritage interviews. The aim is to create a self-generating programme, resulting in a hub of innovative and ultimately healing oral history research in the border area.

At the event both the Northern Ireland Executive’s and the Irish Government’s Justice Ministers’ welcomed the project, recognising its value in promoting grassroots reconciliation and in providing a lasting historical resource.

Justice Minister David Ford MLA said, “In Ireland, North and South, we can never forget our past, nor should we.  Our experiences cost us dearly and we must continue to reflect on the lessons of the past for the benefit of everyone’s future.  That is why projects such as this are so important.

“As much as Northern Ireland has moved on, the legacy of division and segregation is often still obvious.  We will not fully experience the full benefits of the peace process until we have a shared future, where everyone can prosper and succeed together.  I trust this project will provide another way of sharing experiences and I wish Professor McConville and Dr Bryson every success in their endeavours.”

Minister for Justice and Law Reform Dermot Ahern TD said, "This is an inspiring project looking back at a dark period in our history. I believe it will be very valuable for future generations to have the testimony and recollections available from those at the forefront of promoting peace and reconciliation during those terrible and bleak times.

“We can all learn from our past and this research project will have a rich depository of knowledge and experiences from which future generations - and not just historians - can draw. I would like to commend all involved and, in particular, the important role the Dundalk Institute of Technology is playing."

The project will be overseen by Professor Seán McConville and Dr Anna Bryson (Queen Mary, University of London and Trinity College Dublin), both experienced scholars in oral history research relating to Irish politics.

Dr Anna Bryson said “We are delighted to see such an excellent turnout and we are heartened by the many generous offers of assistance.  As well as the support of our own universities we are fortunate to have as partners Dundalk Institute of Technology.  The Institute has a distinguished history of conducting cross-border and cross-community research and already hosts a number of highly successful peace projects.

"Our online directory of existing research on the peace process underlines our determination to learn from and to build on work that has gone before.  We are nevertheless confident that this inter-jurisdictional project is unique in its approach, blending social action with academic values, skills and ethics.

“We want to hear from groups or individuals who have been involved in or affected by the processes of conflict and reconciliation. We are particularly attuned to the needs and sensitivities of those individuals and communities whose voices have not yet been heard, whose experiences remain largely unknown, and who until now have lived within a culture of protective silence.”

If groups or individuals are interested in learning more or engaging with the project they can visit www.peaceprocesshistory.org