For those undergraduates embarking on a year abroad as part of their degree, it is money management, worries about whether their language skills are up to scratch and loneliness that top the list of concerns, according to research by the Learning Institute at Queen Mary, University of London. 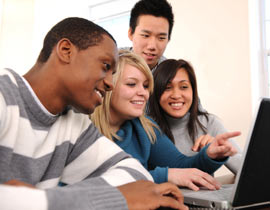 Of those students surveyed, researchers noted that 96 per cent already use Facebook, so decided a dedicated page on the social network site was a good way to ensure those students could stay connected, and keep up to speed on departmental news, despite their geographical distance from staff and from each other.

As Facebook is a social space, researchers were aware that students might feel a sense of conflict if academics or departmental administrators encroached on the site to answer queries or post information. Research by Hewitt and Forte in 2006 found that up to a third of students they surveyed may not expect – or want – to see academic staff invading their virtual network. In addition, academics aren’t always best placed to answer many of the questions students going abroad want answered.

Researchers therefore decided on an e-mentoring model, working with the modern languages departments at Queen Mary to hand-pick suitable fourth-year students who had completed the year abroad programme who could work as ‘mentors’ on the Facebook page.

These student mentors are closer in age to the students going abroad, and have the advantage of knowing not only how to use social networks but also what kind of language and behaviour are normal apply. This stops other students feeling surveyed, scrutinised or uncomfortable, which they might if they were interacting with academics.

For one hour a week, mentors answer questions posted on the group’s page, keep discussions flowing and also occasionally pose more intellectually challenging questions, for example, negotiating the cultural differences encountered when living abroad. Prior to taking part they are given training in e-mentoring and how to create a welcoming atmosphere online when they only have text on a screen to communicate with, rather than behavioural resources such as tone of voice, body posture or facial expressions.

As the project developed, researchers found that while Facebook was good for managing social relationships online, it was difficult to store lots of practical information on it in an easily accessible format. Helpful information on topics such as how to best find accommodation or navigate European university bureaucracy risked getting lost on the wall posts.

To counter this problem, mentors copy useful information from wall posts and discussion threads into a wiki, linked to the Facebook page. This makes it easier for people to view the collective wealth of wisdom about studying abroad.

Creating a wiki has the added benefit of increasing mentors’ web literacy, as they learn basic HTML and think about how to structure information. This, along with the online teaching and mentoring experience, are useful skills for language students to develop, given that many of them are likely to become teachers or other kinds of information professionals once they graduate.

The project is now in its second year; the first year with seven mentors, and eight the year after. The Facebook group has 121 members at present, comprising current students and graduates, however it is an open site so more people may be visiting sporadically. In 2008/09 there were 81 outgoing Erasmus student from Queen Mary and 87 in 2009/10.