A Russian cinema expert at Queen Mary, University of London has rediscovered a collection of WWII films, documenting Nazi atrocities towards Soviet Jews, hidden for more than 60 years in Russia’s State Archives. 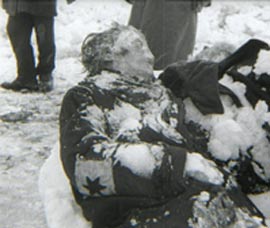 In a recent lecture at Queen Mary, Dr Hicks argued that these images, dating back to 1941 when the Germans invaded Russia, should be designated the first cinematic representations of the Holocaust.

In the shorthand of history, explained Hicks, we tend to conceive of the Holocaust in terms of the death camps in Poland, but often represent it through images of concentration camps in Germany, liberated in 1945 by Allied troops, and captured on film by British and American newsreel cameramen.

“But the mass murder started earlier and it started in the Soviet Union, with the mass killings of up to two million Soviet Jews, shot or starved by German troops during the war.  Their plight has not had its place in cinematography.”

He is currently examining why Soviet coverage of the Second World War, particularly events in the East received, and continue to receive, so little attention in the West.

“It is true that Soviets did manipulate their films,” admits Hicks, “so as a source it was viewed as “tainted and treated with extreme suspicion”. “The Cold War only served to strengthen this logic,” he adds.

However, Hicks suggests an analysis of Soviet footage forces a reassessment of our understanding of the depiction of the Holocaust on film.

“Certainly, the Soviets’ films were designed for propaganda,” says Hicks, “but they also had an element of truth to them. By taking images of the dead, and the digging up of mass graves, they were trying to push their soldiers to fight harder, to take vengeance.

“It was an effective tool, but at the same time it should be remembered that the deaths were not staged. This was a real war of extermination that was being inflicted upon them. Only Poland lost more victims, proportionately, in World War II.”

While Soviet propaganda films, says Hicks, were not averse to showing civilian deaths, by contrast British newsreel footage of the bombing of Coventry or the Blitz, show almost no close-ups of dead Brits on home soil.

What you don’t often see in Soviet news is obvious references to Jewish victims, Hicks points out, as the Soviets did not like to divide the dead; instead they portray the killings as indiscriminate - murdered for being Soviet, not for being Jews.

“The Soviets took footage of a pile of ritual Jewish prayer shawls, for example, when they liberated Auschwitz, but they never included it in their news reels. They were clearly symbolic, and revealed that thousands upon thousands of Jews had been murdered and victimised.

“As incredible as it sounds, to include them would have turned off public sympathy towards the war effort. Early on in the conflict, the BBC held similar concerns and did not emphasise that the Jews were being targeted in its news reports.

“During the war, when Soviets took footage for their newsreels, most clips with Jewish references, the prayer shawls, or victims wearing the Star of David armbands, for example, were edited out.

“But unlike in Orwell’s 1984, where everything that contradicts the State’s message is destroyed, the real out-takes and off-cuts were retained and kept in their archives; Russians have a very strong archival tradition.

“The fate of Soviet Jews is something that people still don’t really talk about. Certainly nobody wants to define it as the first chapter in the representation of the genocide of the Jewish people.

“But it is one of the most significant events in the twentieth century, and determines our world to a huge degree. And these documentary clips offer a chance to portray the Holocaust to as wide a public as possible,” says Hicks.

Hicks found the majority of the newsreels and archive footage in the Russian State Archive of Film and Photo Documents in Krasnogorsk, outside Moscow.

Additional information was discovered in Gosfilmofond, in Belye Stolby, also just outside Moscow.

He used paper records from the industry, the individuals and the studios in the Russian State Archive of Literaure and Art, and the cinema museum.

For his lecture, Dr Hicks focused on a handful of those stills and clips that represent atrocities uncovered in the southern Russian city of Rostov (1941), in the western Russian town of Livny (Orlov district) in 1942, in Kerch (Crimea) in 1942, in Kharkov (Ukraine) in 1942 and 1943, and in Kiev (Ukraine) 1943.

With the exception of the images from Livny - in which surviving Jews show the armbands they were made to wear by the Nazis - these all depict images of the dead photographed immediately following the Red Army's recapture of territories.

These images were taken by Soviet newsreel cameramen - most of whom worked to a strict template of how to represent these scenes, and therefore imparted little by way of an authorial imprint upon the images they took as they integrated the scenes of loss and atrocity into an overarching upbeat narrative of resistance and victory.

The one exception is in the case of Ukrainian director Aleksandr Dovzhenko, whose documentary film 'The Struggle for Our Soviet Ukraine' (1943)  uses witness testimony as well as distinctive editing and a poetic voice over to evoke a sense of loss and mourning that counterweighs and will outlast the prospect of victory.