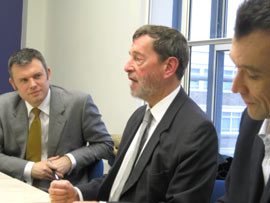 The former Home Secretary was at the College to speak to third-year history undergraduates taking the Blair Government module – a course analysing the politics behind Tony Blair’s decade at the helm.

During the hour-long seminar, David Blunkett offered students a candid insight into the inner workings of New Labour and its ambitious agenda to reform public services such as education, employment and the Treasury.

“It’s an obsession of mine that we should have taken on the Civil Service reform agenda much sooner,” he revealed. “You cannot change the delivery of public services or be responsible for bringing about massive social change if you don’t change the mechanisms for that delivery.”

“We were far too respectful…trying not to politicise the Civil Service, we were accused of doing so even when we weren’t so we might as well have done something much more radical and progressive if we were going to have that hung around our necks.”

Students quizzed David Blunkett on his views on immigration after 9/11; alleged factions within the Labour party; and the PR disaster that was the Millennium Dome, which he admitted was “not one of our finest hours”.

Afterwards David Blunkett – with guide dog, Sadie in attendance - praised the rigorous line of questioning posed by students, saying: “If I had come to the seminar cold, I would have thought they were postgraduates.”

After three years, he became Home Secretary (2001-2004­). While at the Home Office, Mr Blunkett was responsible for a broad portfolio including civil emergencies, security, terrorism and expenditure.

“As I came in to the Home Office we were just trying to recover from the riots Bradford, Burnley and Oldham back in 2001 - we were then hit by the September 11 attack on the World Trade Center,” he explained.

“Everything that I planned to do had to be modified to deal with the aftermath of the terrorist attacks. That affected a number of things we planned to reform - not least, trying to get a real debate going about citizenship and identity.”

David Blunkett resigned from the cabinet in 2004 but returned after the 2005 general election as Secretary of State for Work and Pension; a position he held until resigning six month later. He has been Member of Parliament for Sheffield Brightside since 1987.