The danger posed by groups such as the Real IRA and Continuity IRA is now at its greatest level in over a decade, and is likely to increase.

A new report commissioned by the International Centre for the Study of Radicalisation and Political Violence’s (ICSR) at King’s College London, written by Dr Martyn Frampton, Queen Mary, University of London, is the most authoritative attempt to date to address the recent resurgence of violent republicanism. 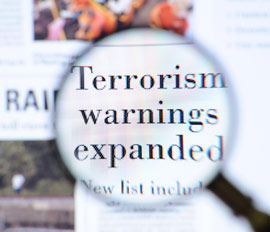 In the recent National Strategic Defence and Security Review, ‘residual terrorism linked to Northern Ireland’ was identified as a Tier One risk to national security. MI5 has raised the official threat level from dissident republican groups from ‘moderate’ to ‘substantial’ and warned against the real possibility of a strike on the British mainland, in addition to the ongoing threat posed to the police, army and security services in Northern Ireland.

Return of the Militants analyses the origins and the nature of the threat posed by violent dissidents, provides a timeline of their recent activity, and an introduction to the various groups associated with the dissident cause. Drawing on the expert testimony of former security service personnel, the report also examines the changing security environment and evaluates potential responses to the increase of the threat.

The main conclusions of the report are as follows:

Changing power structures in republican areas. The growth in dissident strength has been paralleled by the retraction and withering of the Provisional IRA in some areas, as well as other structures of social support for the broader Provisional movement (Sinn Féin offices, community groups etc.).

Dissident capacities remain potent and lethal. Such groups do not have to go through the same ‘learning curve’ as many other start-up terrorist groups. There are a number of individuals within their ranks who were heavily involved in the IRA’s campaign before 1998 and who retain high levels of operational experience, including bomb-making.

A weakened security structure. The Police Service of Northern Ireland (PSNI) has struggled to respond to the challenge posed by dissident republicans. Some senior officers or former senior officers have admitted the existence of a skills-gap, following changes to the policing and security infrastructure since 1998, alongside budgetary cuts.

Talking does not provide an easy answer. It has been suggested that the best way to deal with these groups is to talk to them, as happened with the IRA. However, their whole raison d’être is to oppose the political process, and to avoid the traps of negotiation which they believe the leadership of Sinn Féin fell into in the 1990s.

Return of the Militants is the most up-to-date and comprehensive assessment of violent republicanism in the public domain.