Youngsters must take more steps for their health

New figures reveal that over a third of 11 and 12 year olds in Tower Hamlets, east London are overweight or obese - 11 per cent higher than the national average, according to figures from Barts and The London School of Medicine and Dentistry. 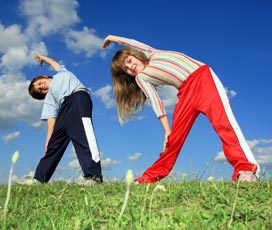 Clinicians say if parents can not persuade their children to go out and take regular exercise they face a catalogue of health problems possibly lasting a lifetime.

The steps survey looked into body composition and activity levels of Tower Hamlets children who wore pedometers to measure the number of steps taken in an average week.

Now the person behind the steps survey says youngsters need to take up exercise urgently as a form of medicine to beat the problem.

Dr Zoe Hudson, of the Centre for Sports Exercise and Medicine, part of Barts and The London School of Medicine and Dentistry said: “These figures from the children we’ve measured in east London are most alarming because they score a lot lower than the recommended number of steps per day. Parents need to realise inactivity can potentially lead to many future health problems, such as heart and breathing problems, diabetes and depression. Exercise however is probably the best pill ever invented. It makes us happier and improves our overall health and well-being.”

The latest statistics came to light after just under 200 children were surveyed for body composition and physical activity levels. The children from Tower Hamlets were given pedometers to wear to measure their daily activity levels over an entire week.

The survey which concentrated on children from the Whitechapel area found children are more active on weekends than weekdays and boys more active than girls. But the main finding was that both are well short on internationally-recognised recommended number of daily steps.

Although this was only a pilot study, the high levels of excess body weight and obesity and low levels of activity identified make for worrying reading.  The research team will be extending the study to include more children in the borough to see if these results are representative, said Dr Hudson.

In Year 6 (10-11 year olds) nearly one in three are either overweight or obese nationwide so the new figures from east London do not paint a healthier picture.