A new drug for multiple sclerosis can dramatically reduce the chances of a relapse or a deterioration of the condition, according to a new study from researchers at Queen Mary, University of London. 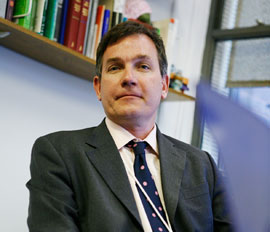 The results of a major trial presented at the Annual Meeting of the American Academy of Neurology in Seattle show that taking a course of cladribine tablets just a few times a year can reduce the chances of a relapse by well over 50 per cent. And patients who took part in the study suffered very few side effects.

If it becomes available to patients, cladribine will be the first licensed treatment for MS which does not involve regular injections.

Multiple sclerosis is a disabling neurological condition which usually starts in young adulthood. It is the result of the body’s own immune system damaging the central nervous system. This interferes with transmission of messages between the brain and other parts of the body and leads to problems with vision, muscle control, balance and memory.

For the 85,000 people in the UK who suffer from MS, the treatments which are currently available have to be given by frequent injections or intravenous infusions, and the benefits have to be weighed up against a number of side effects.

The new study involved over 1,300 MS patients who were followed up for nearly two years. Patients were given either two or four treatment courses of cladribine tablets per year, or a placebo. Each course consists of a single tablet per day for four or five days, adding up to just eight to 20 days of treatment each year. During the trial patients were monitored using MRI scans.

The study’s lead researcher is Professor Gavin Giovannoni of Barts and The London School of Medicine and Dentistry, part of Queen Mary, University of London. He said: “These results are really exciting. MS can be a very debilitating illness and at the moment treatment options remain limited. Having an effective oral therapy will have a major impact for people with MS.”

“Our study shows that cladribine tablets prevent relapses and slow down the progression of the disease making patients feel better. Importantly, it does so without the need for constant injections that are associated with unpleasant side effects”

“We will continue to follow the patients in the trial to see how they fare in the long-term.”

Cladribine tablets work by suppressing the immune system, reducing the risk of further damage to a patient’s nervous system.