A Neuroscience student from Barts and the London School of Medicine and Dentistry has won the prestigious London Student of the Year award. 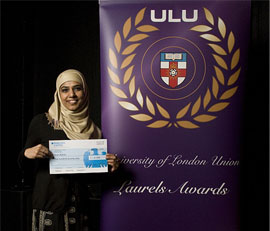 Kiran Rahim and her award

Kiran Rahim was honoured for her academic achievements as well as her ongoing work with Teddy Bear Hospital at Barts and The London. The prize is part of the University of London Union Laurels Awards that recognises outstanding performances by students who have overcome difficulties and improved the experience of university for others.

On receiving her award, Rahim said: “I was both shocked at first and honoured to have won but it is always a pleasure to have your achievements acknowledged and I am ecstatic to have received this award.”

The Teddy Bear Hospital scheme was set up with the aim of working with sick children in hospitals to allay their fears and anxieties about their illness and to promote healthy lifestyles. Students also visit primary schools in Tower Hamlets where they teach children about the human body using their teddies.

Rahim’s nomination was supported by one of her tutors, Dr Jeannette Naish, who commended her for demonstrating exceptional leadership skills and ensuring the clinics were well attended by both medical and dental students.

“I am so happy and proud for Kiran. I think my most outstanding thought is that Kiran's work with Teddy Bear Hospital is a real contribution to the Tower Hamlets community. This is probably something that all good doctors should aspire to,” said Dr Naish.

“The university is proud of this project that makes a real difference to the children of Tower Hamlets.”

Rahim collected her award with Dr Naish last week at the Laurels Awards ceremony, which is the highlight of the Union’s year and celebrates the achievements and commitment of members.