Researchers at Queen Mary, University of London and the University of Cambridge have found that rooks are capable of using and making tools, modifying them to make them work and using two tools in a sequence. 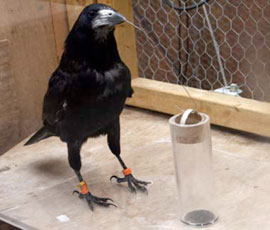 The results are published on-line this week in the journal Proceedings of the National Academy of Science (PNAS).

In a series of experiments, the rooks (a member of the crow family) quickly learnt to drop a stone to collapse a platform and acquire a piece of food, and subsequently showed the ability to choose the right size and shape of stone without any training.

Not only could they use stones to solve the task, but they were flexible in their tool choice, using and modifying sticks to achieve the same goal. When the correct tool was out of reach, they used another tool to get it, demonstrating the ability to use tools sequentially. In further tests, the rooks were able to use a hook tool to get food out of a different tube and even creatively bent a straight piece of wire to make the hook to reach the food.

“We suggest that this is the first unambiguous evidence of animal insight because the rooks made a hook tool on their first trial and we know that they had no previous experience of making hook tools from wire because the birds were all hand-raised,” said Dr Nathan Emery, from Queen Mary’s School of Biological and Chemical Sciences.

These findings suggest that rooks’ ability to use tools and represent the tools’ useful properties may be a by-product of a sophisticated form of physical intelligence, rather than tool use having evolved as an adaptive specialisation, such as has been proposed for the tool using abilities of New Caledonian crows.

“This finding is remarkable because rooks do not appear to use tools in the wild, yet they rival habitual wild tools users such as chimpanzees and New Caledonian crows when tested in captivity,” added Chris Bird from the University of Cambridge, the lead author of the study.

‘Insightful problem solving and creative tool modification by captive nontool-using rooks‘ will be published in the online edition of PNAS on Monday 25 May 2009.