Physicists at Queen Mary, University of London have begun looking deep into the Earth to study some of nature's weirdest particles; neutrinos. 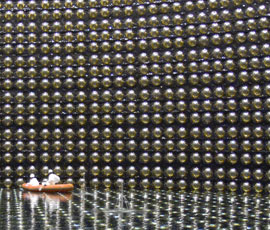 Starting from the end of November, Queen Mary's Particle Physics Research Centre is the sole recipient of the T2K experiment data. The T2K Collaboration is a 500-strong alliance of scientists in 12 countries, who have come together to investigate the ghostly neutrino.

Physicist Dr Francesca Di Lodovico said: "Trillions of neutrinos pass through our bodies every second, but you don't notice; they pass through space and the Earth with almost no effect. This makes neutrinos very difficult to study and yet they are thought to play a fundamental role in the formation of the Universe and understanding where we came from."

Neutrinos come from outer space, either shot out from the Sun, or left over from the Big Bang. But despite their abundance, techniques to understand their nature have only been developed in the last few decades, giving surprising results.

"Theories predict there should be three types of neutrinos," Dr Di Lodovico explained. "Unexpectedly, early data seems to suggest that they can change type from one to another, an observation which has profound implications on our understanding of the Universe."

By firing the most intense neutrino beam ever designed, underground from Tokai on the east coast of Japan to a detector on the country's west coast, it is now possible to observe what happens to the particles as they travel through our planet. Do they change type? And if so, why?

Scientists hope that neutrinos could be the key to understanding how the Universe has evolved over time and teach us more about deep-space events like supernovas, active galaxies and gamma-ray bursts. They could even explain one of the biggest mysteries of the universe; why we have lots of 'matter', but only tiny amounts of 'anti-matter'.

Dr Di Lodovico says: "T2K will quickly advance our understanding of the strange properties of the enigmatic neutrino to unprecedented precision. Within a year, we will be able explore neutrino properties beyond the reach of the current experiments and shed light on the unknown."

Queen Mary's world-renowned particle physicists have made a significant contribution to the international experiment. As well as aiding the design and construction of the main detector, several group members are also involved in using the data now being collected to explore the properties of neutrinos, using powerful computers available at the College.