Particle physics in a rubber dinghy?

Don your eye patch and join a motley band of scientists, friends and followers hiding out in the depths of London Bridge's atmospheric SHUNT Lounge for an extraordinary voyage through the strange seas of particle physics. 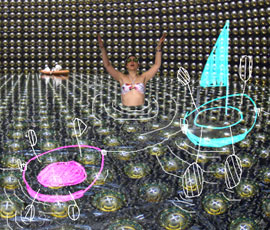 With 50,000 tonnes of super pure water and a crew of expert navigators from Queen Mary, University of London, and Imperial College London, Super K Sonic Booooum is a mind blowing installation demonstrating the visual equivalent of a massive sonic boom.

A remarkable fusion of water, light and science, the installation - developed by award winning designer Nelly Ben Hayoun - is inspired by physicists at the Super-Kamiokande (Super K) neutrino observatory, a massive subterranean scientific instrument used - amongst other things - to discover traces of exploding stars out there in the universe.

One of the most abundant building blocks of nature, the neutrino is also one of the least understood. They interact very very very rarely with normal matter - you, me, the Earth, or any other bit of the visible universe - and as such, when observed, can give us insight into the basic nature of matter, the universe, and the laws of physics.

Invisible to high-energy detectors like the Large Hadron Collider at CERN, scientists search for neutrinos using highly specialised low-energy detectors like the Super K neutrino observatory. As neutrino particles interact in the Super K detector, they produce electrons, muons and other tiny particles travelling faster than the local speed of light; it is these particles that produce the "sonic boom", and it is this science which inspires Super K Sonic Booooum.