Scientists from Queen Mary, University of London have discovered a new protein complex operating in fruit fly circadian clocks, which may also help to regulate our own biological clocks. 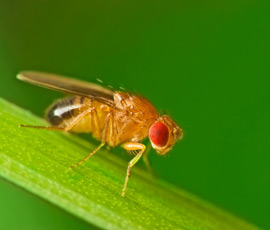 Circadian clocks are thought to have evolved to enable organisms to match their behaviour to specific time slots during the 24 hour day. They are synchronised with our surrounding environment via natural light or temperature cycles.

Professor Ralf Stanewsky and his team from Queen Mary’s School of Biological and Chemical Sciences study the circadian clocks of Drosophila, a type of fruit fly. The flies’ body-clocks are regulated by two proteins called Period (PER) and Timeless (TIM).

The current model of circadian clocks in flies involves the formation of complexes between these two different clock proteins, known as heterodimers (TIM:PER). Similarly, mammalian circadian clocks (including those in humans) also rely on a heterodimer complex made up of the Period (PER) and Cryptochrome (CRY) proteins.

But now, a new study performed in Professor Stanewsky’s lab shows that a complex made of two identical Period proteins, known as a PER:PER homodimer is also crucial for circadian clock function in flies. Writing in the journal PLoS Biology, Stanewsky explains how his team designed a PER protein which could only join with TIM, not with itself.

“We generated a mutation in the PER protein which prevented the formation of the PER:PER dimer, but not that of the PER:TIM heterodimer,” he explains. “These mutant flies showed drastically impaired behaviour and molecular clock function, suggesting that PER homodimers are vital for the function of circadian clocks.”

The mutant fly PER proteins were designed using structural protein data generated by Dr Eva Wolf at the MPI in Dortmund (Germany). In the same issue of PLoS Biology the Wolf group reports findings indicating that the PER:PER homodimer could also be an important feature of circadian clocks in mammals, including humans.