‘Now you see it, now you don’t’; how new artificial intelligence can help us understand how we see

Queen Mary scientists have, for the first time, used computer artificial intelligence to create previously unseen types of pictures to explore the abilities of the human visual system. 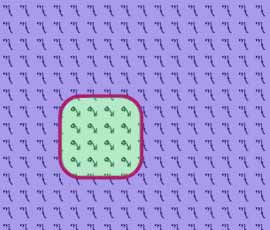 One of the AI produced optical illusions

Writing in the journal Vision Research, Professor Peter McOwan, and Milan Verma from Queen Mary’s School of Electronic Engineering and Computer Science report the first published use of an artificial intelligence computer program to create pictures and stimuli to use in visual search experiments.

They found that when it comes to searching for a target in pictures, we don’t have two special mechanisms in the brain - one for easy searches and one for hard - as has been previously suggested; but rather a single brain mechanism that just finds it harder to complete the task as it becomes more difficult.

The team developed a ‘genetic algorithm’, based on a simple model of evolution, that can breed a range of images and visual stimuli which were then used to test people’s brain performance. By using artificial intelligence to design the test patterns, the team removed any likelihood of predetermining the results which could have occurred if researchers had designed the test pictures themselves.

The AI generated a picture where a grid of small computer-created characters contains a small ‘pop out’ region of a different character. Professor Peter McOwan, who led the project, explains: “A ‘pop out’ is when you can almost instantly recognise the ‘different’ part of a picture, for example, a block of Xs against a background of Os. If it’s a block of letter Ls against a background of Ts that’s far harder for people to find. It was thought that we had two different brain mechanisms to cope with these sorts of cases, but our new approach shows we can get the AI to create new sorts of patterns where we can predictably set the level of difficulty of the ‘spot the difference’ task.”

This new AI based experimental technique could also be applied to other experiments in the future, providing vision scientists with new ways to generate custom images for their experiments.