Jackdaws are highly sensitive to the focus of human eyes, and can follow subtle clues in a person’s gaze according to scientists from Queen Mary, University of London. 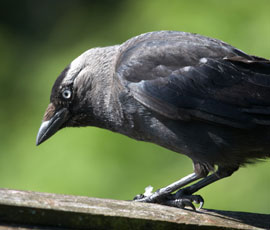 Writing in the journal Current Biology, Dr Nathan Emery from Queen Mary’s School of Biological and Chemical Sciences, explains how jackdaws respond to subtle attention and communication cues in both conflict and cooperative situations.

Dr Emery and his team tested ten hand-raised jackdaws, which were each presented with food in front of a human. They measured how long it took the birds to retrieve the food, depending on whether the human was watching the food or looking away. They also tested the birds to see if they could follow visual cues from a familiar human, to locate hidden food.

The work - which was funded by the Royal Society and the Biotechnology and Biological Sciences Research Council - showed that the birds took longer to retrieve the food if the person was orienting their eye(s) towards it – but only if that person was unfamiliar to them, and therefore considered a threat. Dr Emery explains: “The jackdaws responded to subtle differences in the attentive state of humans. Their. approach latency appeared to reflect the level of attentiveness of the unfamiliar, and hence frightening person. When the person was familiar the jackdaws approached readily, irrespective of the person’s attentional state. This precludes a simple reflex-like eye gaze avoidance mechanism.”

The jackdaws’ reaction to the tests could be a sign of how they communicate with each other. Jackdaws’ eyes are similar to humans’ in that they show a distinct difference in colour between the iris and the pupil, and they are social birds which bond in pairs, and share food and jointly explore their environment.

Dr Auguste von Bayern, lead author on the paper, commented: “We believe that the jackdaws were so sensitive to human eyes because eyes also play an important role in communication between peer and partner jackdaws. Our results not only indicate that jackdaws recognise human eyes as ‘eyes’ but also suggest that jackdaws might have understood something about the eye’s role in visual perception, i.e. that eyes ‘see’.”