Scientists have recovered fossils of a 60-million-year-old South American snake whose length and weight might make today's anacondas and reticulated pythons seem a bit cuter and more cuddly. 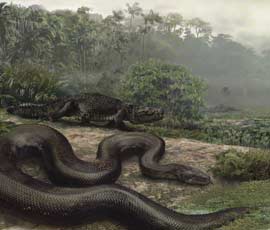 <div class="rxbodyfield"><p>Named <em>Titanoboa cerrejonensis</em> by its discoverers, the size of the snake&#39;s vertebrae suggest it weighed 1140 kg (2,500 pounds) and measured 13 metres (42.7 feet) nose to tail tip. A report describing the find appears in this week&#39;s Nature.</p><p>Drs Jason Head and David Polly carried out much of the quantitative work behind the discovery whilst working in the School of Biological and Chemical Sciences at Queen Mary, University of London; they identified the position of the fossil vertebrae which made a size estimate possible. Now based at the University of Indiana, Polly explains: &#8220;At its greatest width, the snake would have come up to about your hips. The size is pretty amazing. But our team went a step further and asked, how warm would the Earth have to be to support a body of this size?&quot;</p><p>Crews led by the Smithsonian Tropical Research Institute and the University of Florida&#8217;s Florida Museum of Natural History discovered the fossils in the Cerrejon Coal Mine in northern Colombia, and together with lead-author Jason Head now of the University of Toronto-Mississauga, used its size to make an estimate of Earth&#39;s temperature 58 to 60 million years ago in tropical South America.</p><p>Paleontologists have long known of a rough correlation between an age&#39;s temperature and the size of its poikilotherms (cold-blooded creatures). Over geological time, as ages get warmer, so does the upper size limit on poikilotherms.</p><p>&quot;There are many ways the anatomy of a species is correlated with its environment on broad scales,&quot; Polly said. &quot;If we understand these correlations better, we will know more about how climate and climate change affect species, as well as how we can infer things about past climates from the morphology of the species that lived back then.&quot;</p><div class="rx_ephox_inlinevariant" contenteditable="false" inlinetype="rxvariant" rxinlineslot="105" rxselectedtext="" sys_dependentid="8570" sys_dependentvariantid="739" sys_folderid="7999" sys_relationshipid="45450" sys_siteid="378"><div class="inline_img" style=" width: 150px;"><img alt="Snake Vertebra" class="box" contenteditable="false" height="150" src="http://cms.qmul.ac.uk/Rhythmyx/assembler/render?sys_revision=1&amp;sys_siteid=378&amp;sys_authtype=0&amp;sys_contentid=8570&amp;sys_variantid=506&amp;sys_command=edit&amp;sys_folderid=7999&amp;sys_context=0" unselectable="on" width="150" /><br contenteditable="false" unselectable="on" /><span class="sbcaption" contenteditable="false" unselectable="on">Snake Vertebra</span></div></div><p>Assuming the Earth today is not particularly unusual, Head and Dr Jonathan Bloch, Assistant Curator of Vertebrate Paleontology at the Florida Museum of Natural History, estimated a snake of Titanoboa&#39;s size would have required an average annual temperature of 30 to 34&#176;C (86 to 93 F) to survive. By comparison, the average yearly temperature of today&#8217;s Cartagena, a Colombian coastal city, is about 28&#176;C.</p><p>&quot;Tropical ecosystems of South America were surprisingly different 60 million years ago,&quot; said Bloch. &quot;It was a rainforest, like today, but it was even hotter and the cold-blooded reptiles were all substantially larger. The result was, among other things, the largest snakes the world has ever seen... and hopefully ever will.&quot;</p><p>&#8220;The temperature estimation shows that a tropical rainforest, like Cerrejon, lived at a temperature of 32&#176;C, five degrees above the upper limit of temperature for tropical rainforest in modern times,&#8221; said Carlos Jaramillo, a palaeobotanist ad the Smithsonian Topical Research Institute. &#8220;These data challenge the view that tropical vegetation lives near its climatic optimum and it has profound implications in understanding the effect of current global warming on tropical plants.&quot;</p><p>The scientists classify <em>Titanoboa</em> as a boine snake, a type of non-venomous constrictor that includes anacondas and boas. Head and Polly extrapolated the placement of <em>Titanoboa</em> fossil vertebrae by comparing the fossils&#39; structure to the vertebrae of today&#39;s boine snakes. Snake vertebrae get bigger near a snake&#39;s midsection, but they are also structured differently than vertebrae closer to a snake&#39;s head or tail. Using a computer model he wrote, Polly estimated the fossil vertebrae originate near <em>Titanoboa&#39;s</em> middle. That means that if Polly&#39;s model is incorrect about the bone&#39;s placement, the snake could have been even bigger.</p><p>Evolution has produced a wide variety of gigantic animals over the last several hundred million years -- dinosaurs, ancient dragonflies, and today&#39;s blue whale, to name a few; but why some species lineages produce monsters remains a matter of debate among evolutionary biologists and ecologists.</p><p><strong>Ends</strong></p><p>&#8216;Giant boid snake from the Palaeocene neotropics reveals hotter past equatorial temperatures&#8217; will be published in the 5 February 2009 edition of Nature.</p><p>Also contributing to the <em>Nature</em> report were Alexander Hastings, Jason Bourque, Fabiany Herrera, and Edwin Cadena, all graduate students from the University of Florida, and Dr. Carlos Jaramillo from the Smithsonian Tropical Research Institute.</p><p>Funding for the fieldwork came from National Science Foundation, the Smithsonian Institution, Carbones del Cerrej&#243;n LLC (Colombia), the Geological Society of America, and the Florida Museum of Natural History, University of Florida.</p><p>Funding for the quantitative analysis came from the National Science Foundation, the University of London, and Indiana University. The IU Bloomington Department of Geological Sciences is a unit of the College of Arts and Sciences.</p></div>