How your body clock avoids hitting the snooze button

Scientists from Queen Mary, University of London have discovered a new part of the mechanism which allows our bodyclocks to reset themselves on a molecular level. 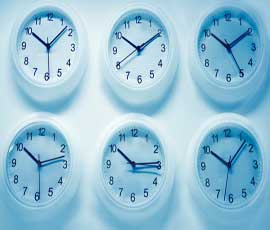 Circadian clocks regulate the daily fluctuations of many physiological and behavioural aspects in life, and are synchronised with our surrounding environment via light or temperature cycles. Natural changes in the length of the day mean that an animal’s circadian clock often has to reset itself on a molecular level, to avoid getting out of sync with the changing calendar.

Professor Ralf Stanewsky and his team from Queen Mary’s School of Biological and Chemical Sciences study the circadian clocks of Drosophila, a type of fruit fly. Writing in the journal Current Biology, they report that the resetting process is governed by three factors, called Cryptochrome, Jetlag and Timeless.

The team's findings suggest that the light responses of circadian clocks are fine tuned on a molecular, by small differences in the binding affinities of clock proteins.

Professor Stanewsky explains: “A circadian photoreceptor called Cry is activated by light in the blue spectrum. Once active, Cry then becomes able to bind to a protein called Jetlag. The Jetlag protein then helps to destroy another protein called Timeless, which is used to reset the bodyclock.

“Crucially though, we found that Jetlag also helps to destroy the original photoreceptor Cry itself. This allows the Timeless protein to reaccumulate during the next day, making sure that the clock mechanism continues to tick.”

‘Light-Dependent Interactions between the Drosophila Circadian Clock Factors Cryptochrome, Jetlag and Timeless ‘ will be published in the 10 February edition of Current Biology.