A pioneering Queen Mary academic who has broken new ground on programme termination has been named as winner of the British Computer Society’s Roger Needham award for 2009. 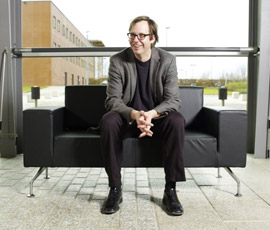 The award to Professor Byron Cook, from Queen Mary’s School of Electronic Engineering and Computer Science, is in recognition of his significant contribution to the development of IT.

Cook created the first practical tool for automatically proving that real-world computer programmes had terminated, or shut down. His software tool, called TERMINATOR, caused a major stir in the program verification research community when it first appeared, and has since been picked up beyond research circles by the Windows development team.

Professor Cook has delivered numerous high-profile keynote talks at major research conferences, and his work has been the subject of considerable press coverage, including Scientific American and Vogue magazine. He divides his time between Queen Mary, and Microsoft's research laboratory at Cambridge University.

Dr Andrew Herbert, Managing Director of Microsoft Research Cambridge says: "Dr Byron Cook's work is highly deserving of this accolade; he has successfully tackled a 70 year old conundrum. As a result of Byron's work, termination bugs in mainstream software are set to become a thing of the past, enhancing both the personal computing experience and helping business IT systems to run more smoothly and avoid downtime."