Frog’s immune system is key in fight against killer virus

Scientists from Queen Mary, University of London have discovered how changes to a frog’s immune system may be the key to beating a viral infection which is devastating frog populations across the UK. 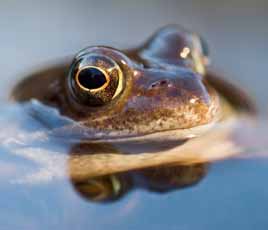 Error processing inline link Problem while processing inline link for item 1-101-10133: Item not in cache: <PSKey CONTENTID=7999 REVISIONID=-1 > See the replacement body in the console log. The attributes on the affected link were: class="rx_ephox_inlinevariant",contenteditable="false",inlinetype="rxvariant",rxinlineslot="105",rxselectedtext="",sys_dependentid="10135",sys_dependentvariantid="825",sys_folderid="7999",sys_relationshipid="37327",sys_siteid="378"

<div class="rxbodyfield"><p>Communities of common frogs (<em>Rana temporaria)</em> are being struck down by a foreign virus which is estimated to be killing tens of thousands of frogs in the UK each year. When it strikes garden ponds, the surrounding lawn becomes strewn with dead frogs, some with skin ulcers so severe they reduce limbs to stumps, others with internal bleeding. The virus, called Ranavirus, has invaded the home counties around London,&#160;and is now spreading north and west.</p><p>Writing in the journal PLoS One, Dr Amber Teacher describes how the frogs&#8217; immune system has responded to the virus. Working with her fellow scientists at Queen Mary,&#160;University of London and experts at the Institute&#160;of&#160;Zoology, she studied ponds where <em>Ranavirus</em> deaths are occurring year after year, and consistently found changes to a gene called the MHC, which codes for a major part of the frog&#39;s immune system.&#160;</p><p>Dr Teacher explains: &#8220;It seems, as&#160;Darwin&#160;would have predicted, that the plucky surviving frogs have passed on to their descendants an immune system which is better tuned to the new threat.&#8221;</p><div class="rx_ephox_inlinevariant" contenteditable="false" inlinetype="rxvariant" rxinlineslot="105" rxselectedtext="" sys_dependentid="10135" sys_dependentvariantid="825" sys_folderid="7999" sys_relationshipid="37327" sys_siteid="378"><div class="inline_img_left"><img alt="Picture of a common frog with Ranavirus" class="box" contenteditable="false" height="144" src="http://cms.qmul.ac.uk/Rhythmyx/assembler/render?sys_revision=1&amp;sys_siteid=378&amp;sys_authtype=0&amp;sys_contentid=10135&amp;sys_variantid=506&amp;sys_command=edit&amp;sys_folderid=7999&amp;sys_context=0" unselectable="on" width="150" /><br contenteditable="false" unselectable="on" /><span class="sbcaption" contenteditable="false" unselectable="on">Common frog with Ranavirus</span></div></div><p>Teacher also found that the frogs&#8217; immune systems are simpler than many other animals, including humans, who have several MHC genes doing a similar job. She adds: &#8220;This discovery has helped identify the point in our evolutionary history when this multiplication of genes occurred.&#160; With luck, even the frog&#39;s simpler system will be sufficient to win their battle&#8221;. &#160;</p><p>It is too early to determine if the adaptation in the frogs&#8217; immune response will be enough to save them from the virus. Her colleague Professor Richard Nichols, from Queen Mary&#8217;s School of Biological and Chemical Sciences added: &#8220;From a scientific point of view we could learn as much about the fight against viruses, whether the frogs succumb or they don&#8217;t; but from a personal point of view I hope these changes are the first signs that the frogs getting the upper hand over the virus.&#8221;</p></div>