Fallow deer become hoarse in the hunt for a mate

Fallow deer become hoarse when trying to attract a mate, according to scientists from Queen Mary, University of London. 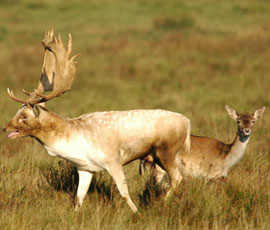 Writing in the journal Animal Behaviour, Dr Alan McElligott from Queen Mary’s School of Biological and Chemical Sciences has found that male fallow deer (bucks) can call for a mate more than 3000 times per hour during the peak of the mating season. Their prolonged vocal efforts cause their call structure to break down, leaving them hoarse.

During the mating season known as ‘the rut’, fallow bucks produce a call or groan, both to attract mates, and repel competing males. Groans contain information about various aspects of each animal, such as their size and status in the herd.

Dr McElligott and Dr Elisabetta Vannoni (University of Zurich) studied a herd of fallow deer in Dublin, Ireland. They recorded the bucks’ groans during three consecutive breeding seasons (2002, 2003, 2004), between dawn and sunset each day during October. Matings in fallow deer populations peak in late October and this is also when competition between males intensifies, called ‘the rut’.

They found that the pitch of groans was lowest during the peak and highest at the beginning and end of the rut. Similar effects on pitch have been seen in men who use their voices for prolonged periods of time, such as teachers and actors.

The duration of buck groans decreased as the rut progressed, probably due to exhaustion and the large weight loss (on average 25 per cent of body weight) that bucks experience at this time.

Dr McElligott explains: “Fallow bucks groan at very high rates during the rut. They also eat less, fight often, and lose a lot of weight. We think the changes in their groan structure are linked to this decline in body condition, and this information on their weakened state could be used by other bucks when deciding to challenge and fight.”

“We believe that this phenomenon might be widespread in animals with similar strategies during the breeding season, in which males call repeatedly, reduce their food intake and consequently lose a lot of condition.”

‘Fallow bucks get hoarse: vocal fatigue as a possible signal to conspecifics’ will be published in the online edition of Animal Behaviour in May.

The work was funded by the Forschungskommission der Universität Zürich, and the Swiss Academy of Sciences.