Ecological Engineering: Could beavers be reintroduced to England?

Beavers could be successfully reintroduced to many parts of England, boosting wildlife and helping to reduce the risk of flooding, according to a report led by a Queen Mary scientist. 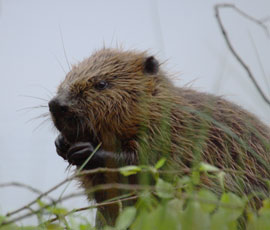 The results of a unique study into the desirability and feasibility of reintroducing the European beaver to the English countryside are published today (Wednesday 18 March) by Natural England and the People’s Trust for Endangered Species. The jointly commissioned report considers the impacts that a beaver reintroduction might have and the conditions under which a reintroduction could be made.

Lead author Professor John Gurnell from Queen Mary’s School of Biological and Chemical Sciences believes that beavers could act as ‘ecosystem engineers’ providing many benefits to the English countryside. “The potential for them to give benefits to the country at large is quite enormous,” he explains. By building dams, for example, they can boost water quality, increase the level of the local water table, alleviate the effects of flooding and raise river levels during drought.

Beavers were once a common feature in the British countryside but were driven to extinction in England 400 years ago. Recently there has been considerable interest in the potential for their reintroduction, recognising the contribution that beavers make to river and wetland management and to restoring lost biodiversity.

Professor Gurnell added that some people feared beavers would cause damage to crops, trees or fishponds, spread disease, damage angling or affect wildlife. But he said "most negative effects are probably more minor than major", and would be reasonably straightforward to manage with forethought. The benefits that the species would bring would more than outweigh any disadvantages.

A planned reintroduction of beavers is set to take place in Scotland later this year and a feasibility study is currently being carried out in Wales.

Commenting on the report, Tom Tew, Natural England’s Chief Scientist, added: “Natural England has not made decisions yet about whether reintroductions should take place. Beavers could have a range of environmental benefits but could only be reintroduced under the right conditions. The challenge in considering any future licence application is to ensure that these conditions can be met”.