'Curtain twitching' skylarks keep track of strangers through their songs

Skylarks can hear the difference between friendly neighbours and dangerous strangers, and deal with any threatening intruders, says new research by scientists at Queen Mary, University of London. 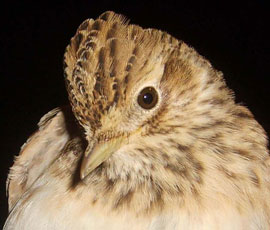 Male skylarks learn to recognise local dialects in their neighbours' individual songs, remember where each neighbour is supposed to be and reprimand intruders who don't belong in the neighbourhood, according to a study carried out by Dr Elodie Briefer, a postdoctoral researcher at Queen Mary's School of Biological and Chemical Sciences.

Published in the Springer journal Naturwissenschaften this week, Dr Briefer and her colleagues at the University of Paris South found that skylark neighbours are tolerated if they stay in their own territory, whereas strangers - skylarks who belong to another neighbourhood - are attacked if they intrude too close to the nest.

Researchers also observed the birds' reactions when they heard the recorded song of another skylark from different directions. The results of the study showed how neighbouring birds who travel too far from their regular territory - a move which is seen as threatening - also run the risk of being attacked.

Males skylarks fiercely guard their chosen home territory, the area of land where they make their nest and hunt for food. The size and position of the male's territory is also important as female birds check it out before deciding who is going to make the best father to her chicks. Each skylark will usually have several neighbours, living in territories that border his own.

Dr Briefer's research found that the songs of neighbouring skylarks share more syllables with each other than they do with strangers, like a dialect. She says: "This may have evolved because it is safer for the birds to live close together, but they need a way to keep intruders out. By sharing a local dialect in their song, they can keep an ear out for other birds that live nearby and kick any strangers out of the neighbourhood."