New research on the fruit-fly brain points to a possible mechanism by which temperature influences the body clock, according to scientists from Queen Mary, University of London. 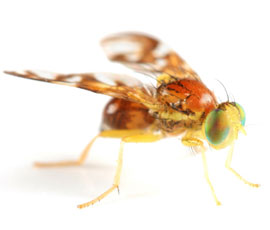 A variety of organisms, including insects and humans, have evolved an internal circadian clock to regulate patterns of behaviour throughout the day - for example sleep, appetite, alertness and concentration.

Senior study author Dr Ralf Stanewsky, from Queen Mary's School of Biological and Chemical Sciences, explains: "Given the substantial similarity between the fly and mammalian clock, our studies might also help to understand the human circadian clock and in the future perhaps contribute to developing treatments against the negative effects of sleep-disorders and shift-work."

Specially evolved "clock cells" in the brain contain the circadian clock, which needs to be synchronised with the natural environmental cycles every day to prevent them running too fast or too slow.

Dr Stanewsky and colleagues have shown that fly brains were unable to synchronize to temperature cycles when separated from the rest of the body. This is in contrast with the ability to synchronize to light-dark cycles, which can take place with or without a connection to the fly body.

Dr Stanewsky's group wants to continue their studies on the fruit fly Drosophila and ultimately learn how the fly ensures perfect synchronisation of the circadian clock with the environment.