The Physics Building at Queen Mary, University of London was renamed in honour of the late Gwyn Owain Jones in a special ceremony this week. 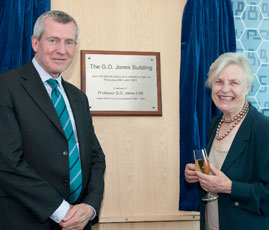 GO Jones served as Head of Physics at the College for fifteen years and he was instrumental in the original design of the building in the late 1950s.

The building, which is undergoing a state-of-the-art refit, has now officially been renamed the G O Jones building by Acting Principal Professor Philip Ogden and Jones’ widow, Elizabeth.

Speaking at the renaming, Philip Ogden said that Jones was 'part of a group of academics who put Queen Mary on the map in the 1950s and 60s'.

He said: "G O Jones taught us something very important: that buildings matter. This building has stood the test of time and as we refurbish, we must respect what he did."

Guests including family members, ex-colleagues and current members of the physics department enjoyed drinks to honour Jones. The formal re-naming ceremony was followed by a sit down dinner.

Elizabeth Jones unveiled a special plaque dedicated to her husband. In her speech she said: “Nothing could have pleased Gwyn more than this honour.”

She added: “He liked dinners and parties and making speeches, and were he able to make one now, he would express with grace and neat phrase his overwhelming pleasure at this distinction bestowed on him.”

Jones joined Queen Mary in 1949 as Reader in Experimental Physics at which time the College was recovering from war-time bomb damage. He became Head of Physics in 1953.

Under his direction the department grew in number of research staff and in student numbers, and expanded into new areas of study such as astrophysics and particle physics.

His research interests included superconductors and the behaviour of matter at extremely low temperatures. He also developed infra-red techniques to observe the Sun, Moon and planets using equipment mounted on the roof of the building.

Alongside his academic pursuits, he took a keen interest in the arts and he worked with the Whitechapel Art Gallery to encourage local artists to exhibit their work in a public space within the Physics building. Later in life, Jones was awarded a CBE for serving as Director of the National Museum of Wales.