Bigger not necessarily better, when it comes to brains

Tiny insects could be as intelligent as much bigger animals, despite only having a brain the size of a pinhead, say scientists at Queen Mary, University of London. 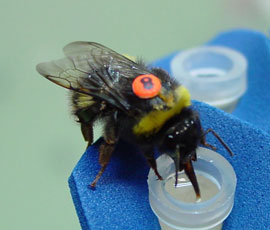 "Animals with bigger brains are not necessarily more intelligent," according to Lars Chittka, Professor of Sensory and Behavioural Ecology at Queen Mary's Research Centre for Psychology and University of Cambridge colleague, Jeremy Niven. This begs the important question: what are they for?

Research repeatedly shows how insects are capable of some intelligent behaviours scientists previously thought was unique to larger animals. Honeybees, for example, can count, categorise similar objects like dogs or human faces, understand 'same' and 'different', and differentiate between shapes that are symmetrical and asymmetrical.

"We know that body size is the single best way to predict an animal's brain size," explains Chittka, writing in the journal Current Biology, today. "However, contrary to popular belief, we can't say that brain size predicts their capacity for intelligent behaviour."

While some increases in brain size do affect an animal's capability for intelligent behaviour, many size differences only exist in a specific brain region. This is often seen in animals with highly developed senses (like sight or hearing) or an ability to make very precise movements. The size increase allows the brain to function in greater detail, finer resolution, higher sensitivity or greater precision: in other words, more of the same.

Research suggests that bigger animals may need bigger brains simply because there is more to control - for example they need to move bigger muscles and therefore need more and bigger nerves to move them.

Chittka says: "In bigger brains we often don't find more complexity, just an endless repetition of the same neural circuits over and over. This might add detail to remembered images or sounds, but not add any degree of complexity. To use a computer analogy, bigger brains might in many cases be bigger hard drives, not necessarily better processors."

This must mean that much 'advanced' thinking can actually be done with very limited neuron numbers. Computer modelling shows that even consciousness can be generated with very small neural circuits, which could in theory easily fit into an insect brain.

In fact, the models suggest that counting could be achieved with only a few hundred nerve cells and only a few thousand could be enough to generate consciousness. Engineers hope that this kind of research will lead to smarter computing with the ability to recognise human facial expressions and emotions.