A Queen Mary Professor and a British-born astronaut will be joining forces this week to give school children the opportunity to control Nasa’s Cassini spacecraft as it orbits Saturn. 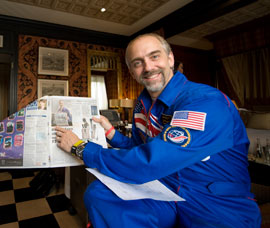 Peter McOwan, Professor of Computer Science, and Richard Garriott will be giving a series of talks at three schools in Leatherhead to launch the ‘Cassini Be a Scientist for a Day’ Competition 2009, which is being run by Queen Mary in association with NASA and the Ideas Foundation, and is open to children from across the UK.

The lucky winners will take control the Cassini spacecraft for a day as it orbits Saturn, and choose which areas of the Saturnian system to investigate and photograph. They will also visit The House of Commons, receive Amazon vouchers and the overall winner will win a telescope for their school.

Professor Peter McOwan is an expert in cognitive science and biologically inspired hardware and software. He is also co-founder of CS4FN, Queen Mary’s award-winning outreach magazine. He commented: “Space has always been interesting stuff, the chance to control Cassini and to be a space scientist for a day will be an out of this world experience for the winners.”

British-born computer games designer and entrepreneur Mr Garriott visited the International Space Station last October on a 10 day trip as one the world’s first ‘space tourists’. He hopes his talks will give hundreds of pupils an insight into space travel, adding: “We need to be adventurous in mind and stimulate our intellects to answer today’s most daunting scientific questions and to invent tomorrow’s technological marvels.”

See Richard introduce the competition on you tube: http://www.youtube.com/watch?v=N2XPM1J0o7s