What’s love got to do with it?

It is always sold as the perfect fairy story, but romantic love has its drawbacks for today’s Caribbean woman, suggests a leading gender studies expert in her lecture at Queen Mary, University of London. 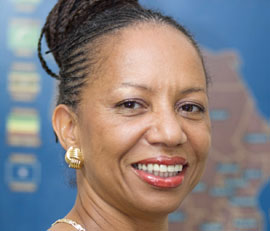 Violet Eudine Barriteau, Professor of Gender and Public Policy at the University of the West Indies, gives the third annual lecture by Queen Mary’s Centre for Research in Equality and Diversity (CRED) on Thursday 11 June.

Using evidence from several Caribbean countries, she reveals the ongoing attempts by men to subordinate women, and how this power struggle affects women - not only in their sexual relations and domestic lives, but also in their contribution to the wider state and economy.

Professor Barriteau explains: “The persistently unequal treatment of women may stem from their intimate relations, but it also impacts on their economic and political participation, the work they undertake and the wages they receive.”

Professor Barriteau is Deputy Principal at the Cave Hill Campus, Barbados and was the first head of the Centre for Gender and Development Studies, at the Nita Barrow Unit. She has been awarded numerous academic scholarships and awards and her research is widely published.

Among the many books she has authored and edited are: The Political Economy of Gender in the 20th Century Caribbean (Palgrave International, 2001) and Confronting Power, Theorising Gender: Interdisciplinary Perspectives in the Caribbean (University of the West Indies Press, 2003).