Tristram Hunt lectures on London through the ages

Queen Mary historian Tristram Hunt has organised a series of fascinating lectures on the capital as part of the Story of London Festival – a month-long celebration of the city’s past, present and future. 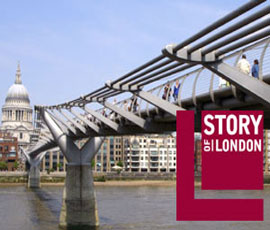 All 12 lectures, which take place over the weekend of 20 and 21 June 2009, have attracted a host of big name speakers, including two high-profile academics from Queen Mary.

“This is a weekend of Britain's greatest historians telling the story of Britain's greatest city,” explained Dr Hunt.  “From secret Cold War bunkers to the building of St. Paul's, and from the digging of London Underground to the docking of HMS Windrush, this is a two-day carnival of the capital's extraordinary history.,” he added.

‘London and World War III’ is the title of the talk by Peter Hennessy, Attlee professor of history at Queen Mary and author of the best-selling The Prime Minister and the Secret State. Professor Hennessy’s lecture is being held at Kings Place on Saturday 20 June, and starts at 2pm.

The following day, Lisa Jardine CBE, Centenary Professor of Renaissance Studies at the College, will speak on St Pauls Cathedral and the life of its celebrated architect Sir Christopher Wren. Her talk is also at Kings Place and begins at 2.30pm.