TV presenter, actor and writer Stephen Fry is to give the 2009 HarperCollins History Lecture, in conversation with Professor Lisa Jardine CBE, at the Royal Institute of British Architects on Wednesday 11 November 2009. 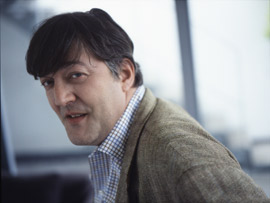 Before an audience of 300 guests, Stephen and Lisa, who is Centenary Professor of Renaissance Studies at Queen Mary, University of London, will discuss the importance of personal accounts of history, which are often overlooked in favour of official versions recorded in history books.

Established in 2002, with the generous support of HarperCollins publishers, the annual lecture series is the centre piece of a public programme run by the Centre for Editing Lives and Letter, one of Queen Mary’s research units.

Now in their eighth year, the HarperCollins History Lecture has become a much-anticipated annual event, with a growing reputation for the calibre of its speakers and the glamour of the occasion at RIBA in Portland Place, central London.

Amanda Foreman, historian and author of Georgiana, Duchess of Devonshire, gave the inaugural lecture; Simon Schama, David Starkey, and Niall Ferguson are among other notable lecturers.

Most recently Amanda Vickery, presenter of Radio 4's acclaimed new series The History of Private Life, gave a stunning lecture that proved not only a hit on the night but also as a podcast made freely available through CELL’s website.