A group of history students from Queen Mary, University of London got a rare opportunity to visit Google’s UK Headquarters in Victoria, London on Monday 15 November. 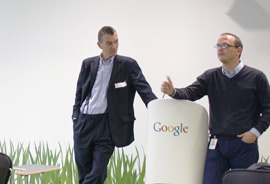 Fourteen undergraduates - all studying the ‘Blair Government’, the College’s ground-breaking course on contemporary political history - took part in a two-hour seminar which covered the history of the British Civil Service and the future of politics in the internet age.

‘Blair Government’ lecturers, John Rentoul of the Independent on Sunday and Dr Jon Davis of the Department of History, encouraged group debate on Whitehall mandarins past and present.

Afterwards, DJ Collins, who runs Google’s UK Public Relations arm and is a Queen Mary history alumnus, provided the class with his perspective on what politics can learn from such online companies.

Google is the world’s best known search engine, and the largest platform for developing web-based applications. Collins described its founding in the late 1990s as a time of “massive technological change”. He also admitted that so much of what goes on in politics now is “fuelled by forces that companies like Google have unleashed”.

Collins talked of the “deep held principles” that Google adheres to, which includes widening access to information – a philosophy that is also shaping modern politics.

“The internet should enable free expression,” he argued. “Look at recent events in Iran, prior to the advent of social media – its citizens wouldn’t have been able to tell the world what was going on.”

Collins, who used to work for the Labour Party, told students that a new, open style of politics is more important for the future of government than constitutional or expenses reform.

“Being trustworthy and accepting and learning from mistakes is crucial,” he said comparing Google to the political establishment. “We innovate and launch products quickly, so they aren’t perfect every time – we make mistakes. But we are honest about that, gain customer feedback and make improvements as we go along. That’s certainly what we have done with Google Wave,” he said talking about its new online tool for real-time communication and collaboration.

During a question session after the seminar, Collins was asked what was next for the web. He replied: “If we were to describe the lifecycle of the internet as an hour, we are only in the first second. The World Wide Web is still broken up by language barriers and needs to be more locally focused. Only last week the first non-Latin domain script was launched for Arabic users, who input text from right to left.

“Soon we can expect software that teaches computers to learn languages so you can type in your own language on email or instant messenger and it is translated to others perfectly to enable you to communicate with people around the world. This idea has a huge economic potential.”

When asked of Google’s decision to move into China and its state restrictions on internet, he commented: “Better for people to have 90 per cent of the information than none at all.”

Pushed for his views on newspapers charging for online content, DJ Collins said it was “up to them” and for anyone interested in news, it was “a debate worth having”. However, he also pointed out that it was a difficult business model to implement in the UK “with a free BBC website”.

Prior to working for Google, Collins was head of news at the former Department for Education and Skills (DfES), and previously held communications roles at Coca Cola and leading PR agency Weber Shadwick.

Before embarking on a PR career he read history at Queen Mary, which he told the students, is “a great subject” to study.