Peter Riddell, Assistant Editor of The Times, is to deliver his paper Transitions of Government, as part of an event organised by The Mile End Group - Queen Mary, University of London’s contemporary history research arm. 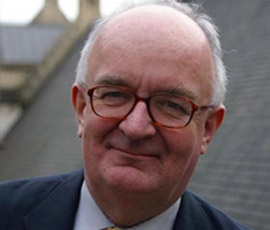 The report, written by Riddell and Catherine Haddon on behalf of the Institute for Government, contains advice and guidance for the next government based on extensive archival research, numerous interviews with those that have been at the heart of previous transitions of government and workshops with senior civil servants, historians, special advisers and political scientists.

Peter Riddell has been Chief Political Commentator and an Assistant Editor for The Times since 1991. Previously he was US Editor and Washington Bureau Chief atThe Financial Times between 1989 and 1991.

He has been a member of the Hansard Society council since 1996 and was elected Chair in 2007. Peter's latest book is The Unfulfilled Prime Minister: Tony Blair's Quest for a Legacy. Previous books include The Thatcher Government (1983), The Thatcher Decade (1989), Honest Opportunism (1993) and Parliament Under Blair (2000). Hug Them Close: Blair, Clinton, Bush and the 'Special Relationship' (2004), won the Channel 4 Political Book of the Year Award.

If you would like to attend this event, please email j.jinks@qmul.ac.uk to reserve a seat.