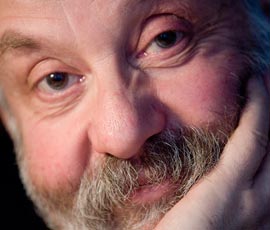 He talked at length to interviewer Dr Sue Harris, Head of the School of Film Studies, about his formal training; early career influences; the changing landscape of film and television; his unique working methods as a filmmaker and his new film, which is currently in production in Bethnal Green.

A 250-strong audience listened as the Secrets and Lies director described being “plucked from provincial, suburban Manchester” at the end of the 1950s to take up a scholarship at RADA in London.

“To come to London was an amazing chance to see world cinema: French, Russian, Italian films and those of the neo-realists. That was an explosive experience,” he revealed.

After RADA, said Leigh, followed a brief period as an actor before embarking on a foundation course at the Camberwell Art School and going to the London Film School in the evenings. Adding that "all of those were ways of trying to find a path into writing and directing".

When asked his view on academic training in the field of film, Leigh stated: “I am one of those people who needs to get on with making work rather than theorising about it, but of course there is always a place for an academic approach to things. You certainly can’t learn how to be a filmmaker, any more than you can learn to be an artist, without really investigating and studying cinema or painting.”

Known for his close social observation and black humour, Leigh’s films are instantly recognisable, in part as a result of his innovative working methods, which do not rely on a written script but involve endless improvisation and rehearsals with the cast to produce characters and plot prior to any shooting.

Personally, Leigh said to Dr Harris, the idea of doing a play or making a film where I would know what it was before we embarked on the journey of making it would be deeply, deeply boring. “It is simply not interesting, any more than it would be to know what a painting was before you painted it and so my natural impulse as a writer, filmmaker and storyteller is to embark on a blind journey,” he explained.

“At this moment I am literally 10 days into making a new film in an empty building not far from here, and my confidence is at its lowest, because the formidable task of bringing a film into existence in the summer feels desperately frightening – I’ve not quite started to have sleepless nights, but that’s about the middle of next week.”

The interview then moved on to the subject of Leigh’s popular BBC plays Abigail’s Party (1977) and Nuts in May (1976) and the fate of the one-off play on modern television.

In the late 1960s to the end of the 1970s, explained Leigh, you’d make dramas, always dealing with social issues of one sort or another and you would score sometimes 16 million viewers, because “people watched television, and you couldn’t flick through 50 channels of crap”.

“It was very creative and in a way old fashioned, but liberated BBC – a forum for people to express ideas and explore,” he added.

Leigh also revealed that the opportunity to make feature films on contemporary British life did not really arise until the birth of Channel 4, a station then very much committed to independent production, in the early 1980s.

The television channel “changed the landscape” of British film, enabled him to showcase his talent as a writer and director with films that made household names of actors such as Tim Roth, Gary Oldman and Jane Horrocks.

Over the years, Leigh has earned wide-spread acclaim for his many feature films. His credits include: Life is Sweet (1990), starring Alison Steadman, Jim Broadbent and Jane Horrocks; Naked (1993), for which he won the Best Director award at Cannes; BAFTA and Palme D’or winning Secrets and Lies (1996), featuring Timothy Spall and Brenda Blethyn; and Vera Drake (2004), with Imelda Staunton in the title role.

As the interview drew to a close, discussion turned to Leigh’s latest international hit Happy-Go-Lucky, which opened in April 2008 and earned him his sixth Academy Award nomination, his second for best original screenplay.

While critics had described the film as “very different” from the rest of his body of work, Leigh pointed out to Dr Harris: “All one’s work inevitably progresses as part of one large whole and every time you make a new piece of work it deliberately does something that confronts expectations and is different because that is part of one’s entrepreneurial responsibility.”