Professor Lisa Jardine CBE has won the 2009 Cundill International Prize in History for her acclaimed book Going Dutch: How England Plundered Holland's Glory, which lifts the lid on the realities of foreign occupation in seventeenth-century Britain. 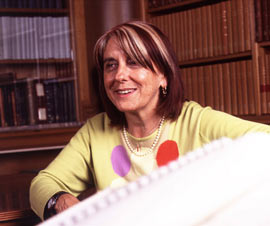 Professor Jardine was announced as the winner, and presented with the $75,000 US prize, at a ceremony at McGill University in Montreal on Monday 2 November 2009.

Jardine, Centenary professor of Renaissance studies in the School of English and Drama at Queen Mary, University of London said she was "ecstatic" at winning such an important prize and regards the win as a great "responsibility."

"We historians have to keep telling our nations about what made them, what created them and what will make their future," she added.

The internationally-acclaimed prize was established in April 2008 by Peter Cundill, himself a graduate of McGill University and now one of Canada's most successful investment managers.

The Prize rewards an author who has published a book with "a profound literary, social and academic impact" on a given subject, and Going Dutch was selected for its "exceptional scholarship, written quality, original presentation and broad accessibility".

Jardine's book is about the so-called ‘Glorious Revolution’ of 1688, when a group of parliamentarians led by Dutch head of state William II of Orange-Nassau overthrew King James II of England, Scotland and Ireland.

"To call our invasion a Glorious Revolution and pretend we invited the Dutch stadtholder in to be our monarch is to distort our past and therefore to distort our present and our future," she told CBC News earlier this week.

"The readjustments in attitude that come about as part of defeat are every bit as important as the great triumphs we like to record on our monuments," Jardine added.

Professor Jardine now divides her time between Queen Mary and her public service role as the Chair of the Human Fertilisation and Embryology Authority.

She is a regular contributor to BBC Radio, to national newspapers and magazines. Her previous books include Worldly Goods: A New History of the Renaissance, Ingenious Pursuits: Building the Scientific Revolution and biographies of Sir Christopher Wren and Robert Hooke.