Academics often paint a bleak picture of homelessness. But there are inspirational efforts being made to support homeless people in our towns and cities, suggests Jon May, Professor of Geography at Queen Mary, University of London. 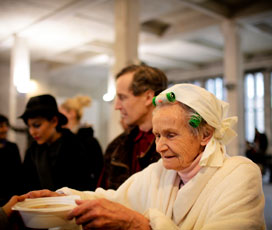 His inaugural lecture ‘Geographies of homelessness, hopelessness…and hope’, taking place on Wednesday 3 June, draws upon the results of a three-year study - ‘The Homeless Places Project’ - undertaken jointly with the Universities of Exeter and York.

The project, funded by the Economic and Social Research Council (ESRC), explored government policies on street homelessness, how they have impacted on the voluntary services trying to help homeless people, and homeless people’s own experiences of the services available to them in seven towns and cities across the UK.

Professor May explains: “Too often the suggestion is that welfare cutbacks, coupled with more aggressive attempts to ‘reclaim the streets’ by introducing, for example, new police powers and no-drinking zones, have left homeless people with no where to turn. And, when they do turn to homeless services, they often have to conform to increasingly strict rules and regulations that may not be helpful to them or may not be able to access those services at all.

“But our findings show the reality is more complex and more encouraging, with many deeply caring and compassionate people working in voluntary organisations who are helping to improve the lives of homeless people in numerous ways.

“Many of these volunteers work in services that have largely escaped the government radar. The charities behind these day centres and soup runs, many of them small scale, faith-based organisations like the Whitechapel Mission, are often sidelined for government funding despite the very valuable work they do with homeless people. Could this be because they don’t sign up to the government’s very particular approach to homelessness? This is one question I will attempt to answer during my lecture,” he added.

Jon May joined Queen Mary as a lecturer in Human Geography in 1999. He was promoted to Professor of Geography in 2006.

He has written extensively on the geographies of homelessness and the politics of migrant labour.

Jon is Chair of the Royal Geographical Society’s Urban Geography Research Group and an editor of Geography Compass.

He is the co-editor or co-author of five books, including Global Cities at Work: New Migrant Divisions of Labour (Pluto Press, 2009) and Swept up Lives?: Re-envisioning the homeless city (Blackwell, 2010).