The French Ambassador to the UK, His Excellency Maurice Gourdault-Montagne is to speak at Queen Mary, University of London on Monday 1 December 2009. 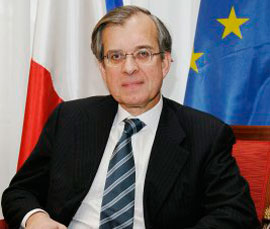 France’s official envoy to Britain since December 2007, Mr Gourdault-Montagne has had a long and distinguished diplomatic career.

Earlier this year His Excellency presented the late Harry Patch, Britain’s last surviving British veteran of the trenches of World War I, with the Legion d'Honneur – the highest decoration in France.

The lecture series is designed explore how international relations feeds into pressing issues such as domestic security, global business and financial stability. Speakers for 2010 include His Excellency, Carles Casajuana, the Spanish Ambassador and Pakistan’s High Commissioner, His Excellency Wajid Shamsul Hasan.

This is a free event, but seat reservation is vital. To confirm attendance , please contact: events@qmul.ac.uk