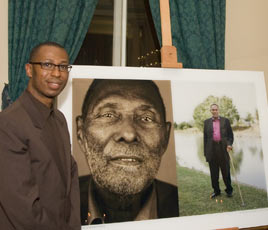 The subject, Professor Stuart Hall, FBA, was guest of honour at the photograph’s official unveiling held at a special reception and dinner in the Senior Common Room of the Queens’ Building to mark the occasion.

Award-winning British black photographer Franklyn Rodgers was commissioned by the College to immortalise Professor Hall in a diptych photograph that will take pride of place in the new Humanities Building, when it opens its doors in 2010.

Professor Hall explained: “I have come to know Franklyn’s work in some depth. He is one of the finest photographic portraitists of his generation, coming right out of that 80s moment of excitement that produced some of the best black artists we have.

“So when I was asked if I had any suggestions of who I would like to create the portrait I immediately thought of Franklyn; I had always wanted to be photographed by him, but he’d never asked me so this was the perfect opportunity to ask him.

“With Franklyn you never get a conventional portrait, but it’s a Queen Mary tradition not to sit in shallow waters, but to discover new places and to seize opportunities to do something striking and up-to-date. I think the result is a stunning portrait and I couldn’t be more pleased,” he added.

Other guests at the evening event included Stuart Hall’s wife, Catherine Hall, Professor of Modern British Social and Cultural History at UCL; Marina Warner, the new Distinguished Visiting Professor of the Humanities 2009 to 2012; Sir Nicholas Montagu, the new Chair of Council; Acting Principal, Professor Philip Ogden; and Vice-Principal for the Humanities and Social Sciences, Professor Trevor Dadson, who described the portrait as “mesmerising”.

Franklyn Rodgers, who attended with his family and presented Professor Hall with a miniature version of the portrait, said: “It was such a great privilege to be asked to work with Stuart Hall, someone who has broken down so many barriers and has inspired my career as a black artist.”

Professor Stuart Hall is a pioneering figure in British cultural studies, lauded for his research and theories on race, ethnicity and cultural identity.

After arriving in England in 1951, Jamaican-born Professor Hall won a prestigious Rhodes scholarship and obtained an MA at the University of Oxford.

He rose to prominence at the Centre for Contemporary Cultural Studies at the University of Birmingham, which he co-founded with Richard Hoggart, becoming director of the Centre in 1968, before moving on to join the Open University as a Professor of Sociology in 1979.

Over the past 40 years, Professor Hall has published a number of influential articles including Situating Marx: Evaluations and Departures (1972) and authored several seminal books, including Questions of Cultural Identity (1996) and Cultural Representations and Signifying Practices (1997).

Following his retirement in 1997, Stuart Hall became a Professor Emeritus at the Open University, a Fellow of the British Academy and currently sits on the Runnymede Trust's commission on the future of multi-ethnic Britain.

As the second Distinguished Visiting Professor of Humanities at Queen Mary, from 2004 to 2007, Professor Hall followed in the footsteps of the great literary theorist, Professor George Steiner who held the post between 2001 and 2004. Professor Quentin Skinner, the former Regius Professor of Modern History at the University of Cambridge, took over the role in 2007 and will be succeeded later this year by Professor Marina Warner.