A trip on a ‘magic carpet’ lets your imagination take flight

With pantomime season upon us, theatregoers across the land will watch spell-bound as Aladdin soars across stage on his gravity defining carpet. How did this much-loved story and others like it convey the power and wonder of flight long before the dawn of aviation? 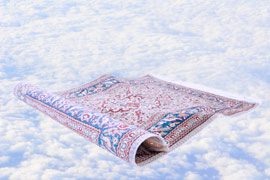 Prize-winning writer and historian Marina Warner will reveal all in her inaugural lecture as Distinguished Visiting Professor in the Humanities at Queen Mary, University of London on Tuesday 24 November 2009.

Professor Warner, an expert on fairy tales, will focus on the story of the magic carpet, its appearances in the Arabian Nights and its connection to airborne fantasies prior to the invention of flying machines.

“For as long as people have told stories, flight has been a magical, divine power conferred on fairy tale heroes and heroines,” explains Marina Warner, who is also a professor at the University of Essex, in the Department of Literature, Film, and Theatre Studies.

“And many myths and tales tell of fantastic flying vehicles that enable such characters to take to the skies,” she says. “Most famous of all of these is the ‘magic carpet’; synonymously linked to the Arabian Nights and everything the stories promise – free-floating fantasy, exoticism, pleasure, and trouble-free travel,” she added.

This well-known symbol has a history and a context, and Professor Warner will explore how they are interwoven with modern ideas of narrative, fantasy, and consciousness.

“First associated with King Solomon and his wisdom, the magic carpet migrates into romances and adventure stories to take pride of place in the 1001 Nights,” Professor Warner explains. “Later it comes to dominate Western storytelling - with its preoccupation with the Orient - especially in the language of enchantment developed by the cinema of special effects.”

Marina Warner is a writer of fiction, criticism, and cultural history; her works include studies of myth, fairy-tales, folklore, literature, and art.

As well as being Queen Mary’s Distinguish Visiting Professor in the Humanities, she is also a professor in the Department of Literature, Film and Theatre Studies at the University of Essex, where she teaches creative writing and a course on ‘The Transformations of Fairytale’, for third year undergraduates.

Lecture: ‘The Figures in the Carpet: Magic and the 1001 Nights’