The Eizaguirre Lab connects fundamental research and applied conservation to answer the many questions and needs from conservation groups and stakeholders.

Our research is interdisciplinary and covers the following topics:

In 2010 we asked ourselves whether the nesting population of Cabo Verde was a unique nesting aggregation or a cluster of smaller genetic-diverse groups. To answer this question, we partnered with conservation groups from 10 different islands. Since then, hundreds of students and volunteers have been collecting DNA samples from nesting turtles, becoming this research the largest citizen project in Cabo Verde.

Of course, having dozens of teams collecting samples is not trivial, even more when you need comparable results. To solve this obstacle we standardised field protocols across the archipelago and we started the Ambassadors Scheme, a sort of internship programme for Cabo Verdean university students or recent graduates that were trained to lead the field teams. Some of these students are now coordinating projects in Sal and Boa Vista.

As a result of our research, we found that the loggerheads of Cabo Verde are distributed in 4 different groups with unique genetic diversity. This diversity has been kept thanks to high philopatry of the nesting females (also known as natal homing). We also found that the islands of smaller nesting populations were the ones with the biggest genetic diversity and, therefore, important to keep the whole population stable. 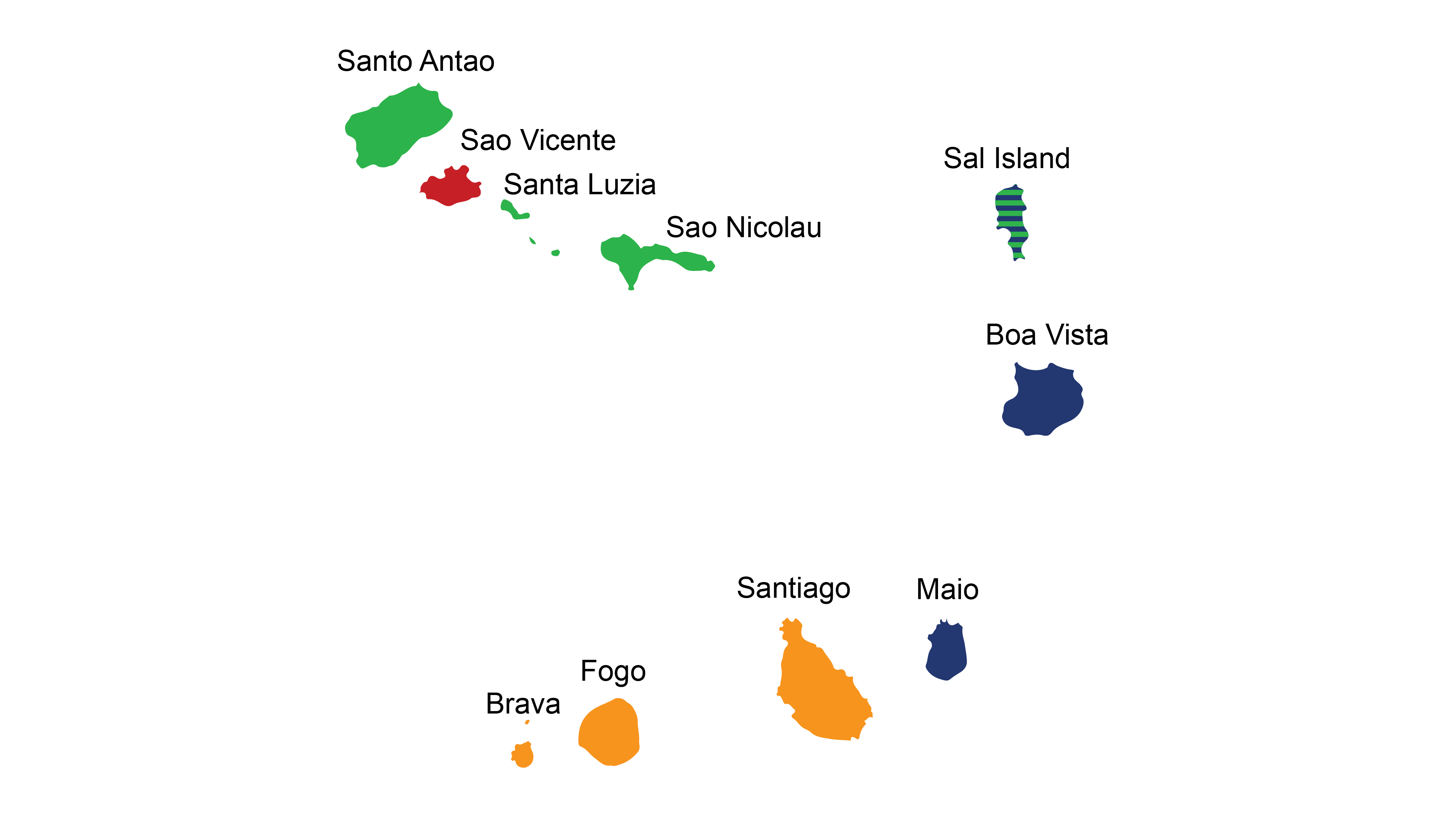 Map of Cabo Verde with the 4 genetic-diverse groups

This research translates into impact:

All data is made publicly available for research or education through our TurtleBase.

Sea turtle sex is determined by the incubation temperature during the embryonic development (a mechanism known as TSD or Temperature-dependent Sex Determination). Today we know that above a certain pivotal temperature, nests will produce more males, while lower temperatures will produce females. This means that the increase in temperature caused by Climate Change could produce single-sex populations of sea turtles, taking them to extinction.

Sea turtles have existed over 110 million years, and have successfully survived previous periods of climate change. As such, we investigate whether turtles possess mechanisms with which to buffer the effect of increasing temperatures on the sex ratio of their offspring. Such mechanisms could be crucial for enabling male offspring to be produced in the future. 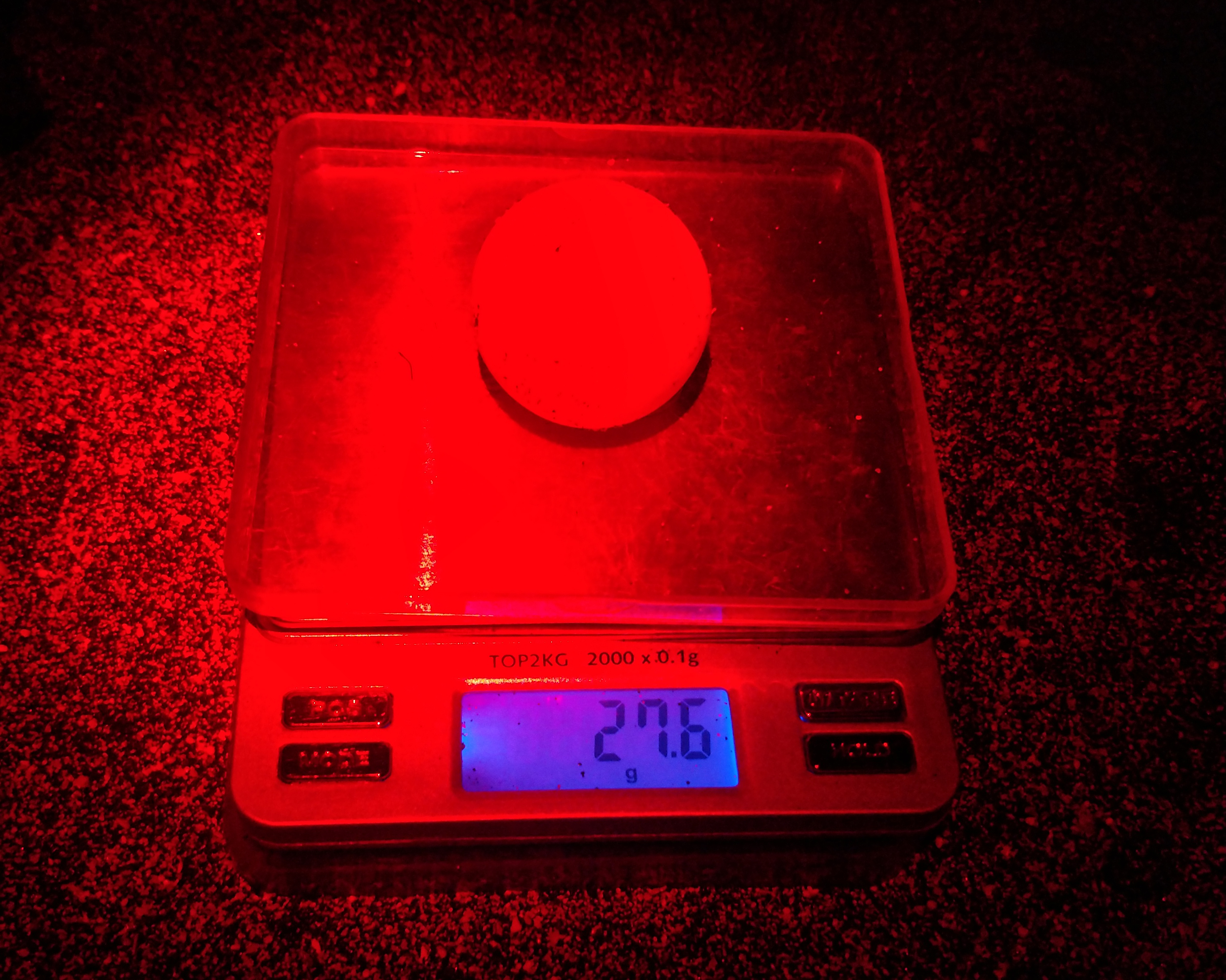 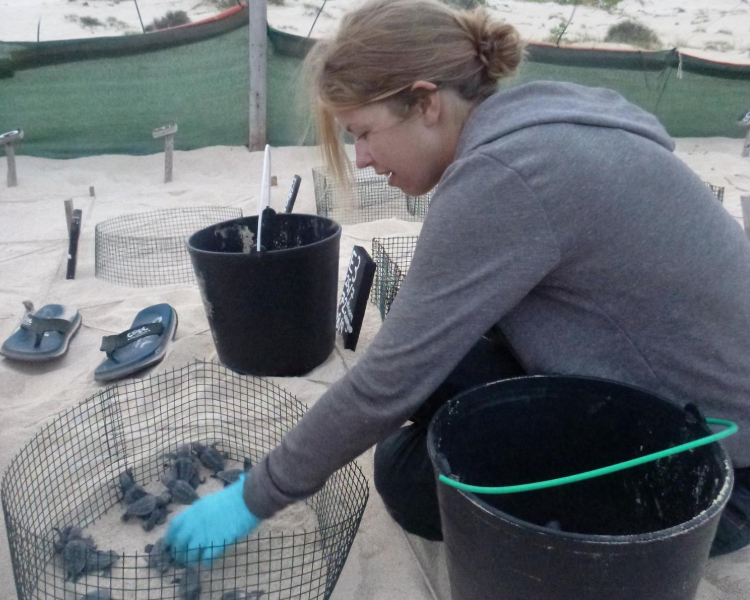 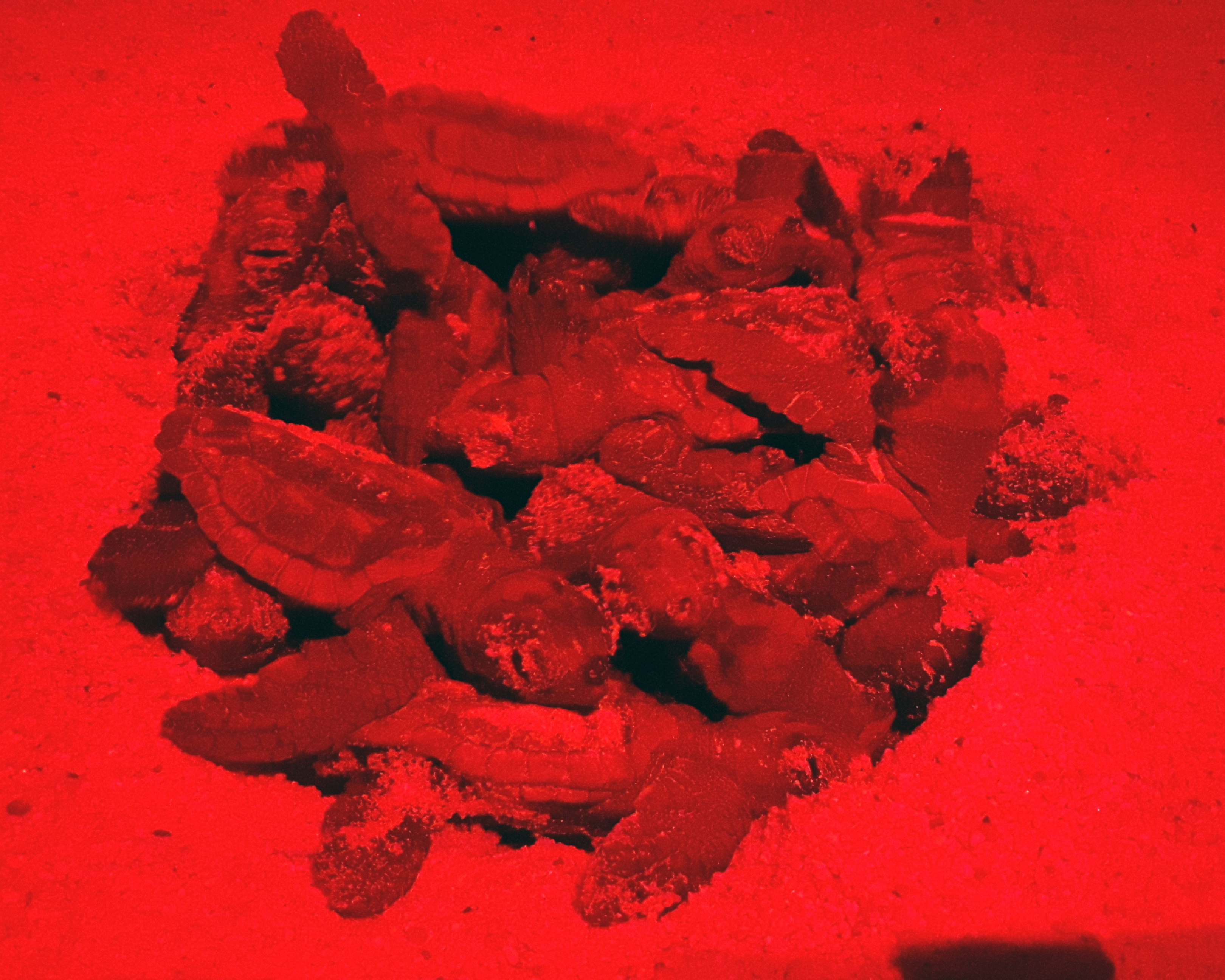 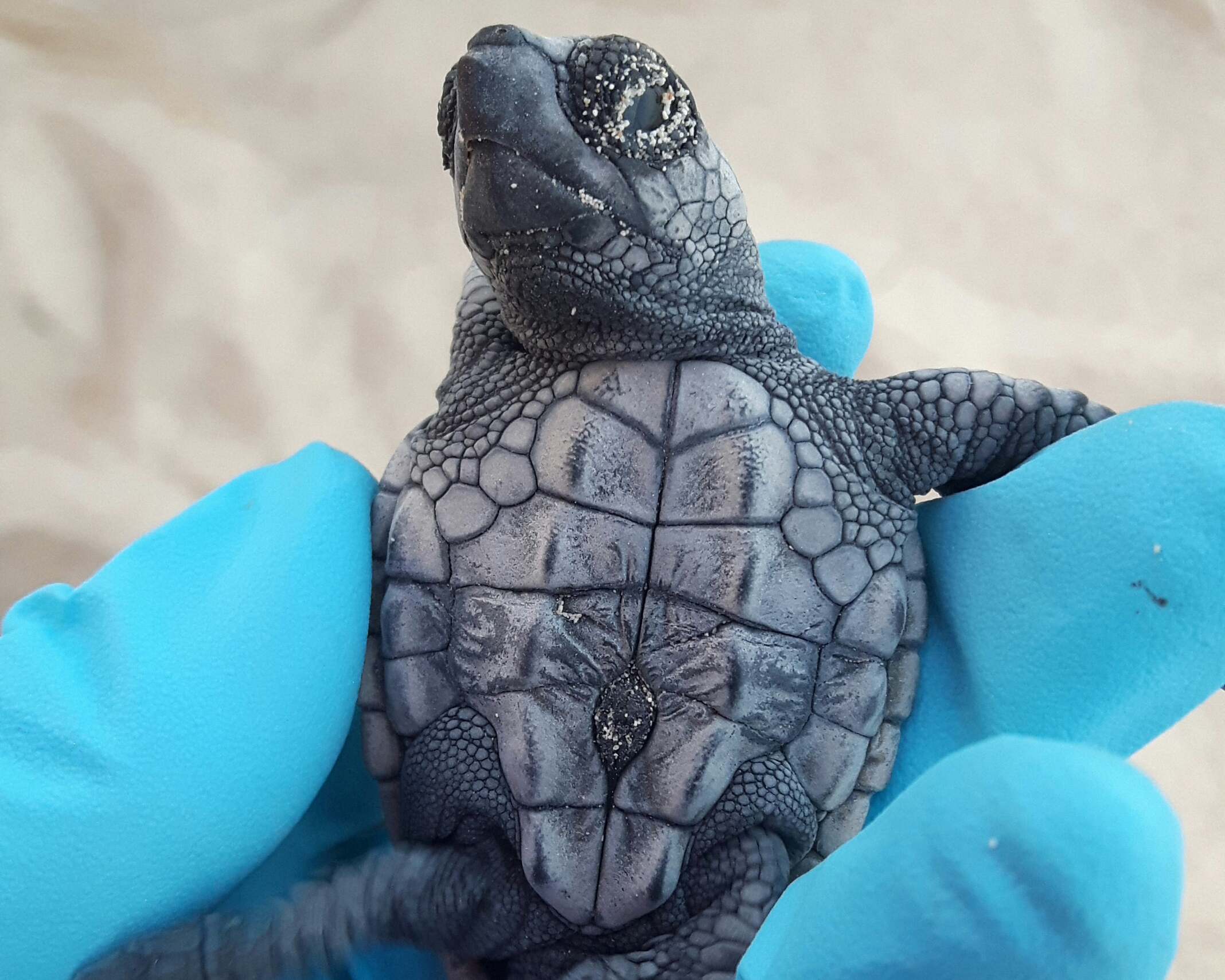 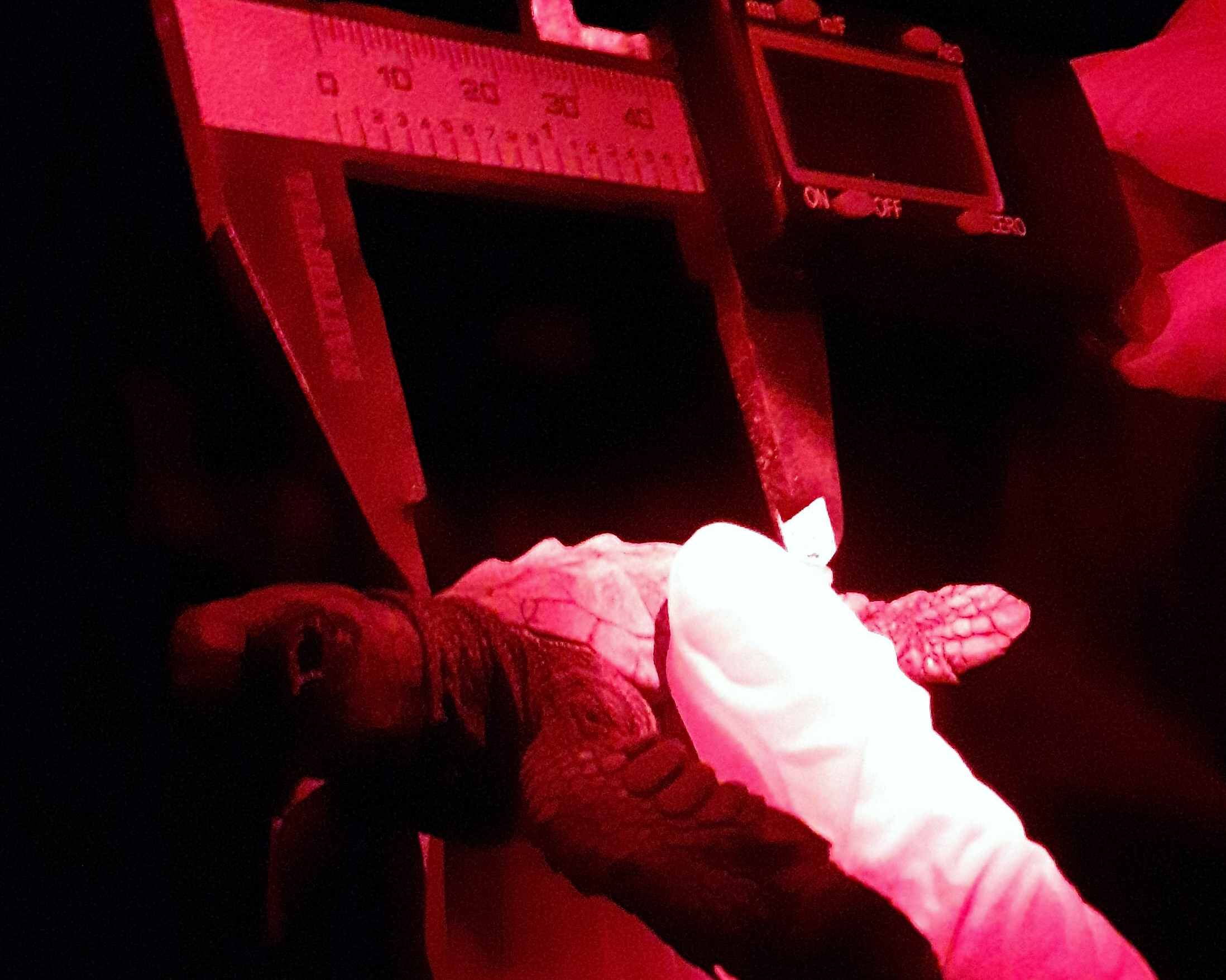 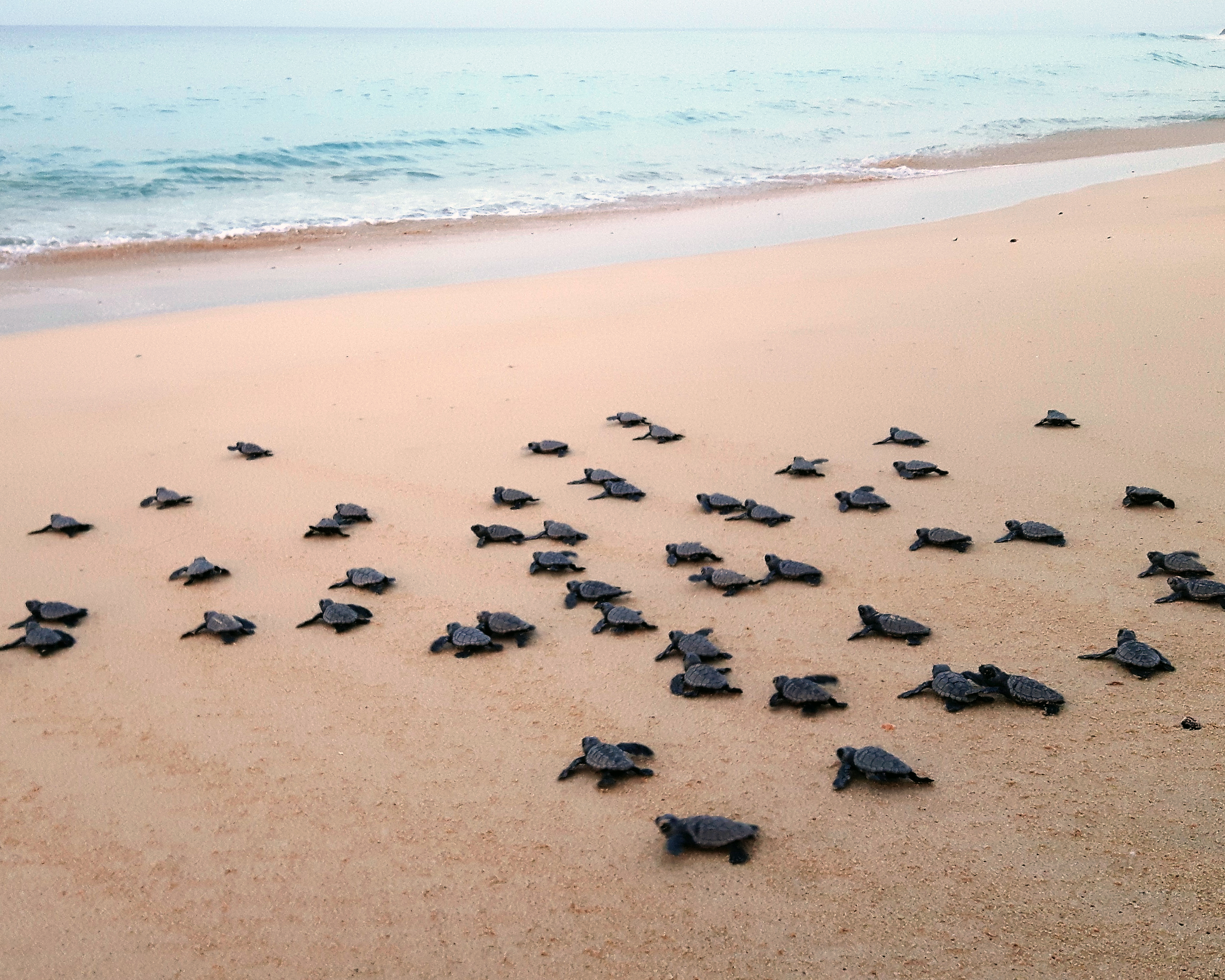 One of the biggest secrets of sea turtles is where they spend their time and what they do while they are in the ocean. Although, this information might seem irrelevant for some people, knowing the whereabouts of sea turtles is crucial for their efficient protection. For example, in Cabo Verde, the most important nesting beaches are protected. But sea turtles spend most of their time in the water and protecting them there is a big challenge for conservationist.

With traditional and new tracking tools, we are filling some of those knowledge gaps and are contributing to inform conservation groups and local and national authorities in Cabo Verde. Some of the applications of our research are: 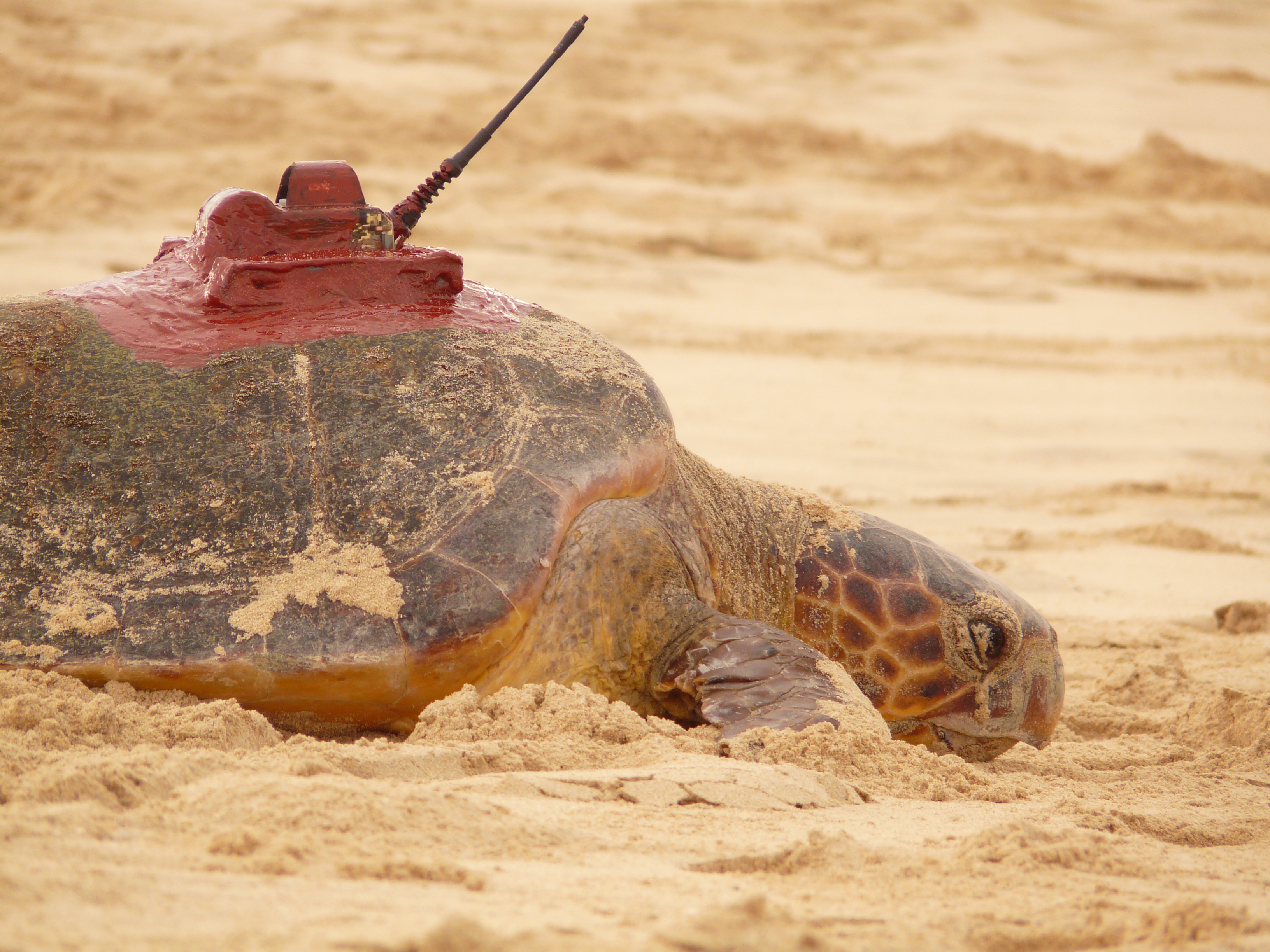 With satellite-based tracking devices, we can track sea turtle for long distances and periods of time. This, in fact, means that we can follow them during their internesting migrations to feeding grounds. So far, we have deployed a total of 15 devices, 11 on females and 4 on males.

While satellite telemetry is a great tool to learn about long migrations, it is a very expensive method and only a few turtles can be tracked. This is why we developed a new device that uses the conventional mobile network (GSM or Global System for Mobile communications) and a GPS. These devices are relatively cheap and allow us to follow multiple turtles during the nesting season when they stay near the coast.

Deployment of a GSM-relayed tag on a nesting loggerhead.

The results are very accurate tracks that give us detailed information on spatial and temporal distribution. Those tracks can be then used to compare interaction with existing MPAs, fisheries coastal development plans, tourism activity and others. 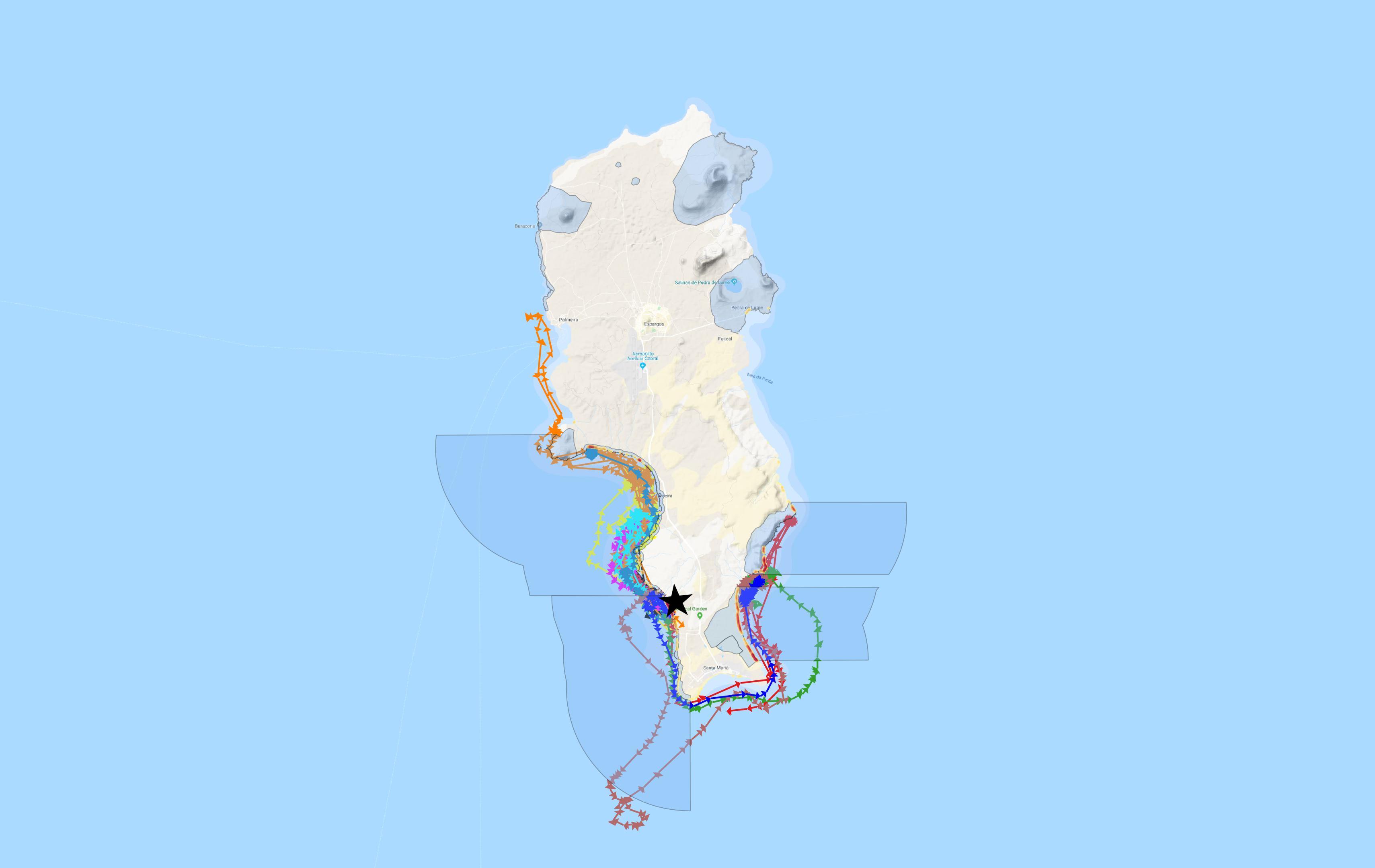 Map of Sal Island with GSM-relayed devices tracks from female loggerhead turtles. The black star marks the beach where the devices were deployed. Darker blue areas are Marine Protected Areas. Lines with arrows are the tracks, each colour represents a different turtle.

Telemetry tracking devices give us very detailed information about the migration of specific individuals. However, drones or UAVs (Unmanned Aerial Vehicles) allow us to identify sea turtles when they are close to the shore in a specific moment. In Sal Island and Boa Vista we are using drones to improve our knowledge on different species of turtles, including adult loggerheads and juvenile green and hawksbill turtles.

With UAVs we can:

We also combine monitoring with UAVs with the results from other tracking devices to corroborate and amplify the results. For instance, with the GSM-relayed devices, we can pinpoint where some turtles are going, narrowing the area to be monitored with drones. 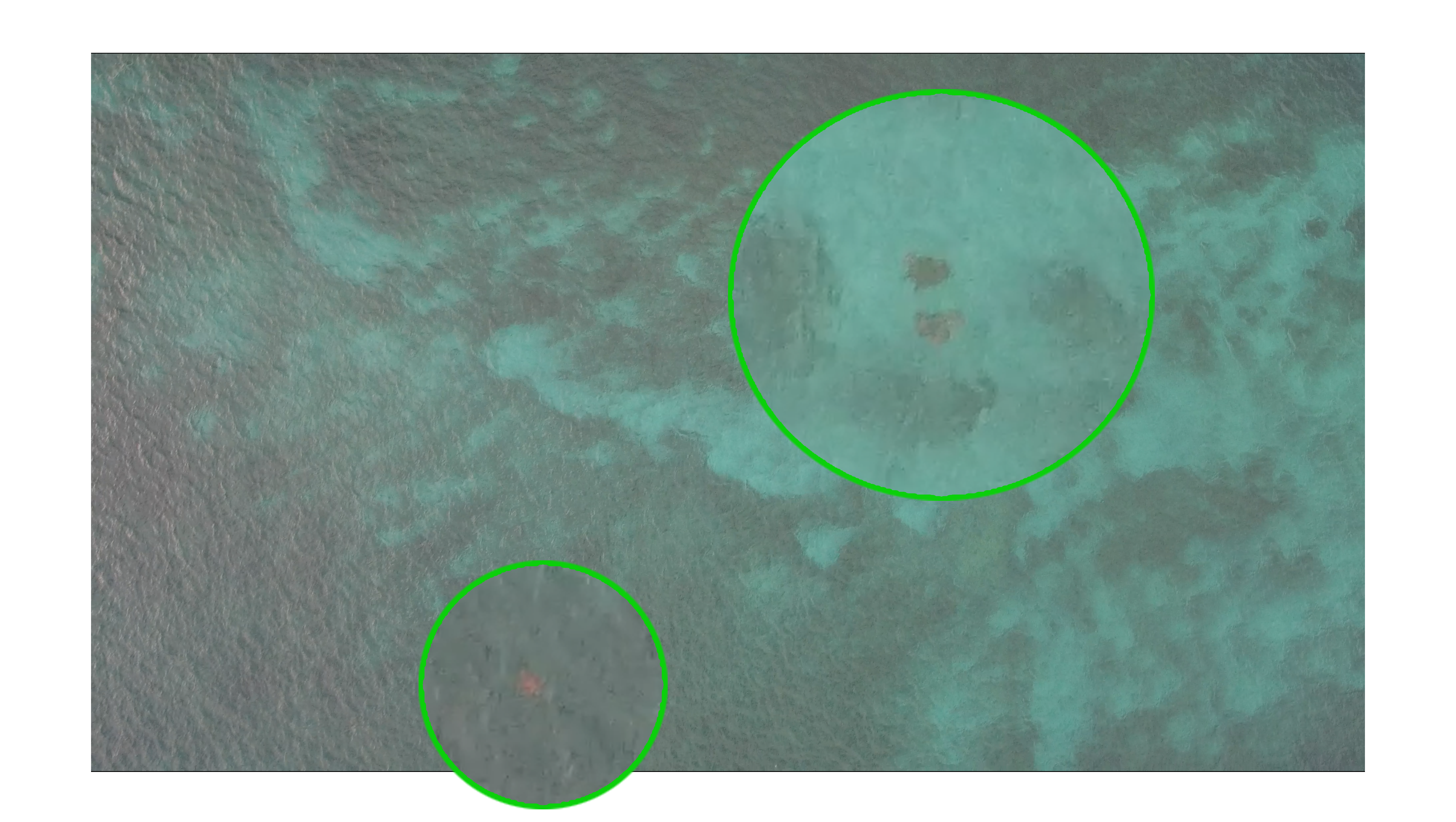 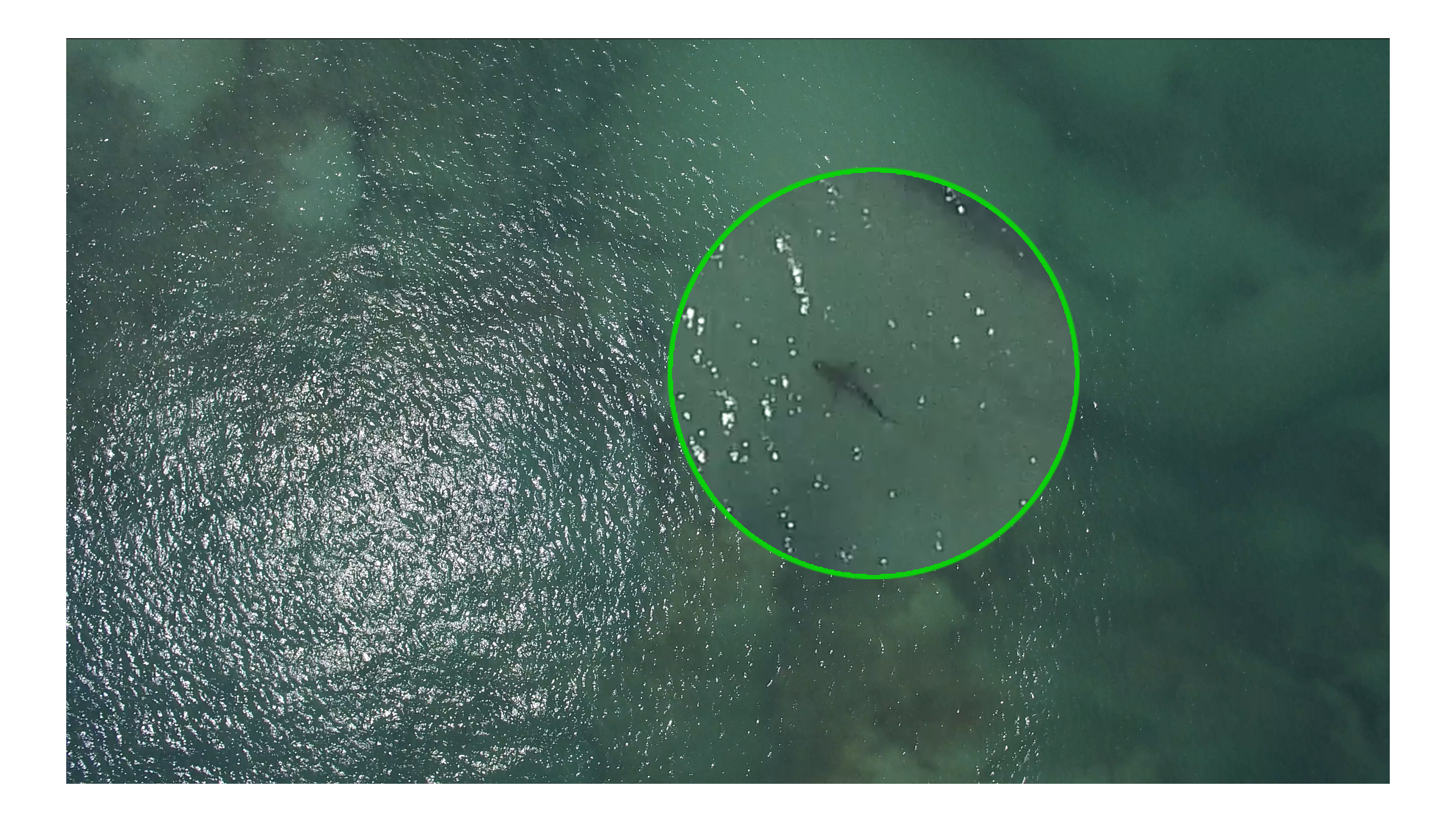 Drone fly at 60 m of altitude with a large shark.

Turtle hatchlings are, by far, the most complicated sea turtle life stage to track. Their small size makes it impossible to follow with conventional tracking devices. Back in 2014, we used novel acoustic nano-tags in newborn hatchlings from the island of Boa Vista to witness their dispersal and behaviour during their first day at sea.

The New York Times made this short report on our research: 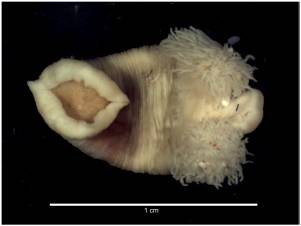 Our long term sampling of turtles across many islands offers an incredible opportunity to observe spatial and temporal fluctuations of parasite load on turtle fitness. Specifically, we record infection levels of Ozobranchus margoi, a leech parasite, in nesting females and measure their effects on reproduction, feeding ecology and physiology on them.

This leech parasite is also speculated to be a vector of the lethal fibropapilloma virus. By sampling the leech and sequencing what infects them, we have an opportunity to detect the arrival of the virus in Cabo Verde and, if need, guide conservation efforts. 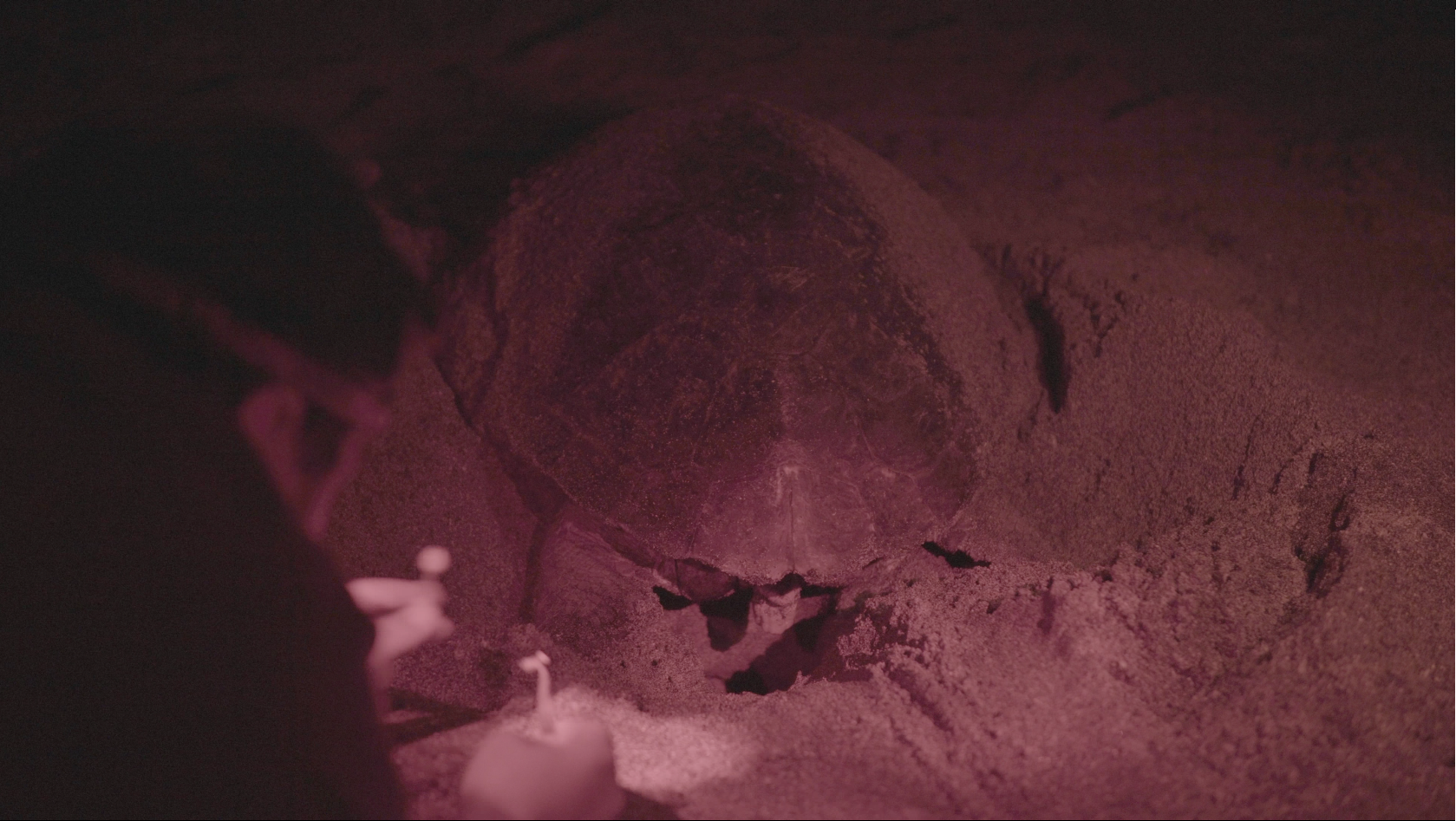 Collection of a leech parasite (Ozobranchus margoi) of a nesting loggerhead turtle.
Back to top