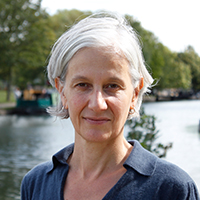 Tessa has been conducting research on equality and discrimination at work for many years. Her interest in equality and diversity started while working for the labour movement, as a researcher and editor at the Labour Research Department, and developed while undertaking EU-funded and commissioned research projects at the Working Lives Research Institute, London Metropolitan University. She joined the staff of the School of Business and Management in 2011, having completed her PhD at the Centre for Research in Equality and Diversity at Queen Mary.

Tessa’s research has focussed on the barriers to and levers for achieving equality and diversity in male-dominated sectors, particularly construction, transport and firefighting. She is currently leading an ESRC-funded project on advancing employment equality through public procurement.

Tessa’s research has covered the experience of women, ethnic minorities, migrant workers and lesbians, gay men and bisexuals in the labour market and workplace, as well as the intersection of multiple identities. She has published on the intersections of gender, sexuality and class in male-dominated work, in journals such as Work, Employment and Society and Gender, Work and Organization, and in a monograph, Gender and sexuality in male-dominated occupations: women working in construction and transport, published in 2016 by Palgrave Macmillan.

Tessa has undertaken research on trade union action to address inequality at work and has worked with a number of trade unions. She was commissioned by the International Transport Workers Federation (ITF) to write a report on The Impact of the Future of Work in Public Transport for Women examining women’s experiences in five cities in the Global South. With Sian Moore and Phil Taylor she researched and wrote a history to mark the centenary of the Fire Brigades Union, Fighting Fire: One hundred years of the Fire Brigades Union, published in 2018 by New Internationalist.

She has a continuing interest in gender and employment in transport and was invited to produce guidance and training for the Transport Division of the United Nations Economic and Social Commission for Asia and the Pacific (UNESCAP) on incorporating gender into transport project proposal. She is currently editing a book (with Lucy Budd and Stephen Ison) on Gender, Work and Transport to be published in Emerald’s Transport and Sustainability series in 2022.

She is currently leading an ESRC-funded project "Buying social justice" through procurement: An examination of the use of public procurement for advancing employment equality in UK construction, with Hazel Conley and Katharina Sarter. The project runs for two years and examines the use of public procurement for equality objectives by local authorities, housing associations and universities in England, Scotland and Wales.

Tessa welcomes applications from prospective PhD students with interests in the areas of: equality and diversity in the labour market; gender and sexuality at work; the intersection of multiple identities at work; the experiences of migrant workers; occupational gender segregation and male-dominated work; trade unions and collective bargaining; discrimination and equality law; public procurement and equality.

Tessa’s research on gender and work in transport has led to invitations to conduct research for the International Transport Workers Federation (ITF), the European Commission DG MOVE and United Nations Economic and Social Commission for Asia and the Pacific (UNESCAP) on Introducing a gendered approach to work in the transport sector.

Tessa’s ESRC project “Buying social justice" through procurement: An examination of the use of Public procurement for advancing employment equality in UK construction, partners with around a dozen practitioner and stakeholder groups and will produce a procurement and equality toolkit.

Affiliate member of the Chartered Institute of Personnel and Development