As part of a series of events running up to the United Nations Climate Change Conference 2021, Queen Mary University of London in collaboration with the National Battery Research Institute and the British Council will be running the workshop ‘Delivering battery revolution: Reducing the drivers of climate change in Indonesia’. The workshop aims to explore the role of the Island nations role in climate change, both globally and locally. 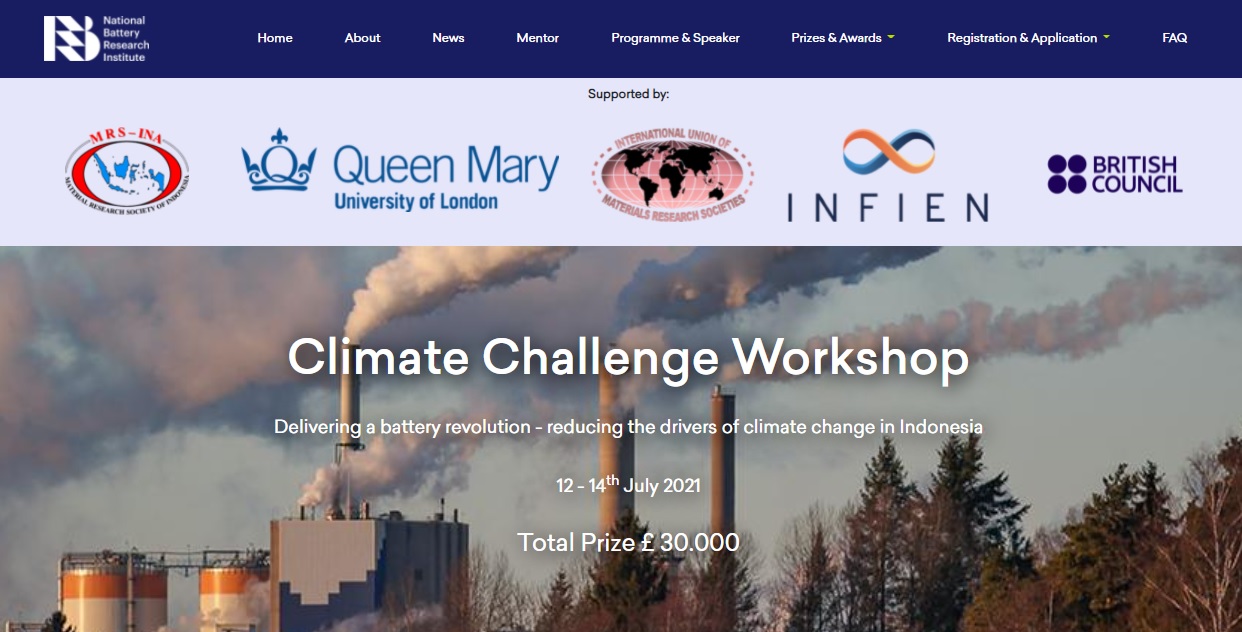 World Environment Day (5th June), a United Nations holiday, has been celebrated since 1974 to raise worldwide awareness and promote action to protect the environment. Raising awareness and action has only become more important as surface temperatures have 1.18oC since the late 19th Century. Much of this increase has been in the last 40 years, with 2016 and 2020 tied for hottest year on record.

COP26, the United Nations Climate Change Conference 2021, will be held this November in Glasgow. The Conference aims to bring parties together to accelerate action towards the goals of the Paris Agreement and the UN Framework Convention on Climate Change.

Queen Mary University of London, in collaboration with the National Battery Research Institute and the British Council are running a pre-conference ‘Climate Challenge Workshop’ for COP26; Delivering battery revolution: Reducing the drivers of climate change in Indonesia. This workshop will run virtually across the 12th to 14th of July.  The workshop, aimed at Early Career Researchers in the UK and Indonesia, hopes to explore the role of Indonesia in climate change locally and globally across a variety of sectors (e.g. transport, energy, tourism) as well as the impact Indonesia faces.

The National Battery Research Institute was established in 2020 and co-founded by Professor Alan Drew, head of the School of Physics and Astronomy’s Centre of Condensed Matter and Material Physics and the Director of the Materials Research Institute at Queen Mary, University of London. It’s founding was supported by the UK Government’s Global Challenge Research Fund as part of the Queen Mary QR allocation.

The institute is Indonesia’s independent institute for electrochemical energy storage. Indonesia has committed to keeping further rises in surface temperature under 2oC and a significant part of this involves investment in electric vehicles; therefore, advanced power storage in the form of batteries are in high demand. Indonesia is the largest producer of nickel worldwide, a metal which is very important for rechargeable lithium-ion batteries. The main goal of NBRI is to encourage and support a battery manufacturing industry using locally resources, which will enable Indonesia to be independent in energy.

The Climate Challenge Workshop aims to address the following themes:

A pre-workshop networking session took place on 7th May, enabling the attendees to form interdisciplinary international groups where they could prepare a bid for funds in research areas linked to climate change, batteries and energy production and usage in Indonesia. Prizes of up to £8,000 each are available for up to four winning research proposals. The session was attended by co-founder Professor Alan Drew as well as two of the project mentors, Professor Sir Colin Humphreys and Professor Elizabeth Tanner from the School of Engineering and Material Science. The submission deadline is later in the month, ready for the workshop in July.

One of the United Nations Climate Change Conference’s key themes is the importance of collaboration. They stress the importance of governments, businesses and civil society working together to transform the way we use our global resources. With funding from Queen Mary, NBRI and The British Council this group of early career researchers will be able to work together on innovative ways to reduce the drivers of climate change across Indonesia.