Queen Mary astronomer Dr Guillem Anglada Escudé is a member of an international team of astronomers who have used a novel method to find a black hole hiding in a nearby group of stars. 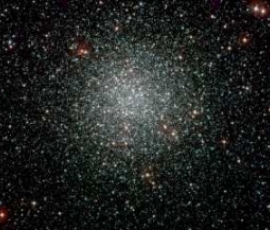 Most black holes we know about were identified by the intense radiation emitted from hot gas falling into the black hole; but now the astronomers have been able to detect a “dormant” black hole that is not actively swallowing material. They did this by looking for the gravitational effect it has on a visible star.

Using the Hubble Space Telescope and the MUSE instrument on the European Southern Observatory’s Very Large Telescope in Chile, they measured the spectra of many stars in the clusters to see if any of them was wobbling. That would be an indication that a star is orbiting around another object. Sure enough, in the cluster known as NGC 3201 they found a star that was being thrown back and forth at several hundred thousand kilometres an hour, with a period of 167 days — but which had no visible companion. They were able to determine that the mass of the invisible companion is just over 4 times that of the Sun; and the only likely invisible object of this mass would be a black hole. In this case it is a dormant black hole — one that is not currently swallowing material from its surroundings — that the technique has revealed; but the analysis of the star's motion is in fact just the same as that used by Dr Anglada Escudé to infer the presence of a planet in orbit around the nearest star to the Sun, Proxima Centauri, in 2016.

This result will help us to better understand how globular clusters formed and how black holes and binary systems evolve — which will in turn add to our understanding of sources of gravitational waves from such systems.

This research is published in a paper by Giesers et al. in the journal Monthly Notices of the Royal Astronomical Society.