Astronomers at QMUL have developed an extremely high-resolution spectrometer for exoplanet studies that is many times smaller, lighter, and cheaper than current alternatives. Its first-light spectrum is thought to be the highest resolution ever taken from the UK! 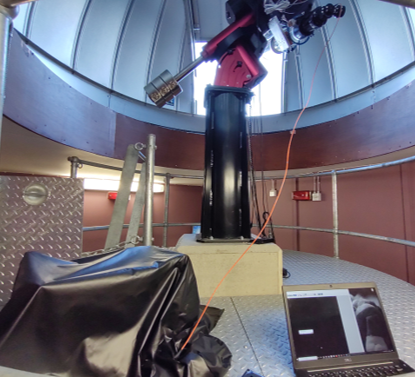 The QMSPEC system, attached to the telescope on the roof of the G O Jones building. The spectrometer itself is shielded from light under the black cover (bottom left), and connected to the telescope by a fibre optic cable (orange).

On the 6th March 2020, Astronomy Unit PhD student Clark Baker undertook the first on-sky testing of QMSPEC: a compact (size of a shoe-box), low-cost (~£10,000), high-resolution spectrometer. This novel spectrometer has exoplanet science applications and is designed to attain comparable resolution to instruments that cost upwards of £1 million and are the size of a car! The test took place at QMUL’s very own roof-top observatory on the G O Jones building, using a custom designed fibre coupling system to efficiently couple the telescope to the instrument. Alongside collaborators, Clark has been developing QMSPEC for the past 3 years as a major component of his PhD thesis.

The first-light on-sky spectra to be taken by QMSPEC was of the Moon. Using the telluric absorption lines from the Earth’s atmosphere it was possible to measure the on-sky resolving power of the instrument to be R~45,000, which means that it can distinguish details in the spectrum separated by a mere one 45-thousandth of the wavelength. Comparing this with the state of the art, Clark said "I suspect that this the highest resolution on-sky spectrum ever taken from London, if not the UK as a whole". With further testing it is expected that this instrument should be able to reach a greater on-sky resolving power of R~60,000. For more information, a paper outlining the design of this instrument can be found in this conference proceeding.

The first spectrum is shown below.