As a geographer my main interests lie with the productive and transformative potential of public health discourses, both in terms of the particular forms of healthy and unhealthy subjectivity that are promoted and the kinds of interventions enacted as behaviour and space are reconfigured in the name of health. My interests have led me to explore a range of issues under the broad rubric of critical public health geographies; ranging from HIV/AIDS and the social construction of risk, historical work on the establishing of ‘urban healtheries’ in nineteenth century London and more recently Black women’s responses to being constructed as an 'at risk' community in public health interventions targeting breast cancer.

These interests have been further extended through my engagement with global health, both as an emergent discourse and as a powerful force for intervening across national borders. I have written widely on the former, contributing to co-authored papers and book chapters that have helped set the agenda for geographical research in this interdisciplinary field. Since 2017 I have been engaged in several UKRI-funded projects targeting improvements in nutrition and associated health-related outcomes for children living in rural Zimbabwe and the urban and peri-urban districts of Harare. Oriented towards global health, these projects are nested within a growing concern for urban health and food security.

Much of my current teaching is organised around themes relating to health and disease, and like my research takes an historical as well as a contemporary perspective. I aim to critically interrogate the unevenness that features so prominently in the social and spatial patterning of health and disease. The modules that I convene and teach consider explanations for these uneven geographies, the social relations and spatial processes that help shape them, as well as what it means to be identified as unhealthy or diseased.

My priority as a teacher in Higher Education is to promote critical understanding. I blend lecture presentations with seminar discussions around key issues and ideas, which aim to promote deeper learning as well as to stimulate engagement. While I am not complacent, selected comments from student feedback suggest that I am achieving at least some of my ambitions as a teacher; referring as they do to an appreciation of the ‘variation in teaching methods,’ to the enjoyment of the ‘interesting topics’ covered, and to the overall quality of the experience: ‘good lecturer, enthusiastic about topics – makes them interesting.’

I convene and teach the following modules:

I contribute through tutorial supervision and academic advising to:

As part of the MA Development and Global Health, I convene the following module:

The focus for my research is to explore questions of health and disease at the intersection of governance and politics. Most especially, I am interested in the productive and transformative potential of public health discourse both in terms of the forms of healthy and unhealthy subjectivity rendered visible as well as the nature of interventions enabled as behaviour and space are reconfigured in the name of health. These interests have led to the development of a mixed programme of research that covers different periods in time and increasingly stretches across space (Global North to South), as well as one that involves engaging with social theory and the diverse range of methods available to the qualitative researcher.

I have written widely on global public health. Initially focused on representations of difference and otherness in relation to infectious diseases and transnational populations, this research was reconfigured to consider questions of mobility, security and vulnerability as they applied to non-communicable disease. Though often rendered problems because of population immobility, a focus on the discourse of the WHO and related agencies revealed the importance of the mobility of risk factors to calculations of global vulnerability for NCDs. This research resulted in the joint convening of several conference panels, an associated special section of the journal Health & Place and the co-organising of an ESRC funded international workshop on the Politics of Non-Communicable Diseases in the Global South, hosted by Kings College London, October 2015 (with David Reubi, KCL).

Since 2017 I have been engaged with a multidisciplinary and international research team developing interventions to promote healthy growth in children experiencing malnutrition in the very early years of life. The research is led by Andy Prendergast (Blizard Institute, QMUL) and is conducted in partnership with the Zvitambo Institute for Maternal and Child Health Research, Harare, Zimbabwe. Operating in a context of almost continual food crisis, the projects aim to identify how a combination of environmental and dietary interventions can improve nutritional uptake amongst vulnerable children living in rural as well as urban areas of Zimbabwe. Working with Kavita Datta (School of Geography, QMUL) and a growing team of social science researchers at Zvitambo (Shamiso Fernando, Exhibit Matumbu and Dexter Chagwena), geographical and more broadly social science approaches are being developed to enhance the efficacy of projects oriented towards the biosciences. This work is ongoing and forms the basis for a grounded understanding of global health interventions as well as opportunities to engage in social science capacity building and South-North/North-South dialogue.

The intersection where food security, nutrition and health meet is a nascent area of interest, initially sparked by research into food security discourses conducted with Sarah Wakefield (Department of Geography and Planning, University of Toronto). More recently, these interests have been picked up in discussion with Susan Craddock (University of Minnesota) where we have begun to outline an understanding of what we refer to as ‘food pathologies.’ Informed by the wide-ranging literature on food as well as by writing as diverse as Paul Farmer’s (2005) Pathologies of Power and Richard Nixon’s (2011) Slow Violence, the concept is being developed to interrogate the ways in which food, whether through its production, manufacture, or consumption, rather than sustaining and nourishing life becomes pathological to it. While only in the early stages of development, this research forms an important third strand to my current research focus.

Biosociality, identity and the contested nature of risky subjectivity (Co-I: Barts and the London Charity 2013-2017)

This qualitative study investigated black women’s responses to being constructed as a biosocial community at heightened risk for breast cancer. The research involved conducting focus group discussions with women living in the Borough of Hackney, East London who had received a DVD promoting breast awareness as part of an intervention designed by clinicians based at Homerton Hospital. In addition to providing valuable insight regarding the women’s perceptions of their ‘at risk’ status as well as of their embodied practices, the study added significantly to understanding the contested nature of their construction as a biosocial community of black women. Contestation featured heavily in the women’s discussions, which not only questioned the role of a largely white research team in constructing them as ‘black’ women at risk but also the assumptions about race and identity they suggested underpinned it.

Drawing on the archives of several philanthropic organisations – the Metropolitan Public Gardens Association (MPGA) and Barnardo’s, this programme of research investigated the importance of ideas about the health promoting properties of the natural environment to urban sanitary reform. Initially concerned with the transformation of disused cemeteries and burial grounds into ‘urban healtheries,’ the research was extended through an AHRC CDA award to include an investigation into the influence of this discourse on the institutional practices and welfare strategies of children in the care of Dr Barnardo’s, circa. 1860 – 1910. Awarded collaboratively with the Ragged School Museum, this project has also involved the development of public engagement activities with the museum and has led to a separate investigation into the work of Barnardo’s in preparing children for emigration overseas, particularly Canada (with Alastair Owens; funded by a small grant from the Centre for the Study of Migration, QMUL 2013).

Brown, T. (2013) The making of ‘urban healtheries’ (Brabazon): the transformation of cemeteries and burial grounds in late-Victorian East London. Journal of Historical Geography 42, 12-23.

I am especially interested in supervising PhD students in the broad areas listed below, though I am happy to discuss supervision of projects outside of these

I very much welcome initial inquiries if you would like to discuss your ideas with me prior to application, further guidance on which is available from the School of Geography website.

As a part of my research activity within the School I've worked with others to build collaborative relations with organisations that serve the communities within and around East London. Examples of this include the collaborative links with the Ragged School Museum and the Shuffle Festival. Both collaborations were supported by funds to help develop and foster public engagement activities and promote research impact.

Educating the East End, past and present, 2014-15 (collaborative project between QMUL and the Ragged School Museum; Humanities and Social Sciences Collaboration Fund, £14,219)

Working in concert with the Director of the Ragged School, Erica Davies, this project with research staff at QMUL (Tim Brown, Oliver Gibson, Peter Mitchell, Alastair Owens (PI) and Tessa Whitehouse) involved the production of a new permanent exhibition for the museum.

Opened by the 12th Earl of Shaftesbury on the 20th October 2015, the exhibition ‘Ragged Children, Mended Lives’ featured a series of nine panels based on original research by the team and illustrated with images from several collections including the Ragged School Museum, the Barnardo’s archives and London Metropolitan Archives.

The team were awarded the QMUL Interact Award 2015, which recognises the partnerships and collaborations that are essential to public engagement. 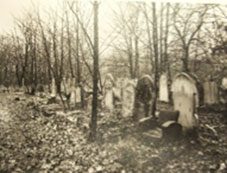 Working in collaboration with the Shuffle team, the aim of this project was to support the work of the Friends of Tower Hamlet Cemetery Park and explore potential research ideas by: