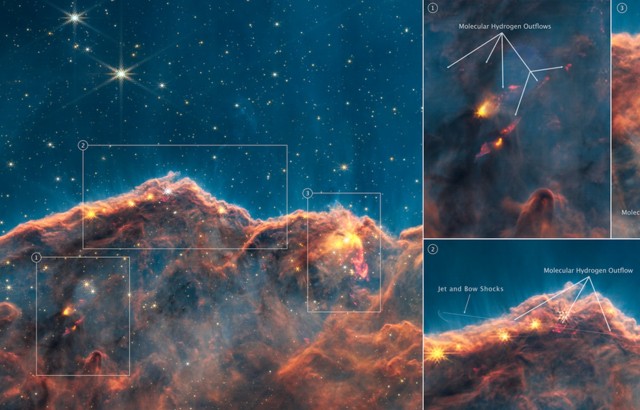 Queen Mary University of London, Royal Observatory and American scientists have taken a “deep dive” into one of the James Webb Space Telescope’s iconic first images and have discovered dozens of energetic jets and outflows from young stars previously hidden by dust clouds. The discovery marks the beginning of a new era of investigating how stars like our Sun form, and how the radiation from nearby massive stars might affect the development of planets.

A paper co-authored by scientists at Rice University, California Institute of Technology, Queen Mary and the Royal Observatory Edinburgh was published this month (December) and released today in the Monthly Notices of the Royal Astronomical Society in December 2022. The science research was conducted on observations collected as part of Webb's Early Release Observations Programme.

The Cosmic Cliffs, a region at the edge of a gigantic, gaseous cavity within the star cluster NGC 3324, has long intrigued astronomers as a hotbed for star formation. While well-studied by the Hubble Space Telescope, many details of star formation in NGC 3324 remain hidden at visible-light wavelengths. The Webb telescope is perfectly primed to tease out these long-sought-after details since it is built to detect jets and outflows seen only in the infrared at high resolution. Webb’s capabilities also allow researchers to track the movement of other features previously captured by the Hubble Space Telescope.

Recently, by analysing data from a specific wavelength of infrared light (4.7 microns), astronomers, including Queen Mary’s Dr. Thomas Haworth, discovered two dozen previously unknown outflows from extremely young stars revealed by molecular hydrogen. Webb’s observations uncovered a gallery of objects ranging from small fountains to burbling behemoths that extend light-years from the forming stars. Many of these protostars are poised to become low mass stars, like our Sun.

“What Webb gives us is a snapshot in time to see just how much star formation is going on in what may be a more typical corner of the universe that we haven’t been able to see before,” said astronomer Megan Reiter, of Rice University in Houston, Texas, who led the study.

Molecular hydrogen is a vital ingredient for making new stars and an excellent tracer of the early stages of their formation. As young stars gather material from the gas and dust that surround them, most also eject a fraction of that material back out again from their polar regions in jets and outflows. These jets then act like a snowplow, bulldozing into the surrounding environment. Visible in Webb’s observations is the molecular hydrogen getting swept up and excited by these jets.

Royal Society Dorothy Hodgkin Fellow in the Astronomy Unit at Queen Mary Dr Thomas Haworth said: “The James Webb Space Telescope has proved groundbreaking in many ways, giving us high resolution, high sensitivity observations of the Universe in infrared light. Infrared light is blocked less easily than visible light, which means the JWST can look deeper into giant star-forming clouds in the Galaxy than the Hubble Space Telescope.

Consequently, its “deeper dive” has unveiled a large number of jets emitted by young stars, that were hidden from view when the Hubble looked at the same region. Those jets inject energy into the surrounding cloud, which theory predicts will make the cloud more turbulent and affect the formation of other stars. Previously, we could only see the jets once they emerged from the dense cloud, at which point they are no longer having any impact. What is significant now it that JWST now gives us the power to go beyond the theoretical models and understand the role jets play in star forming regions.

“Jets like these are signposts for the most exciting part of the star formation process. We only see them during a brief window of time when the protostar is actively accreting,” explained co-author Nathan Smith of the University of Arizona in Tucson.

Previous observations of jets and outflows looked mostly at nearby regions and more evolved objects that are already detectable in the visual wavelengths seen by Hubble. The unparalleled sensitivity of Webb allows observations of more distant regions, while its infrared optimization probes into the dust-sampling younger stages. Together this provides astronomers with an unprecedented view into environments that resemble the birthplace of our solar system.

“It opens the door for what’s going to be possible in terms of looking at these populations of newborn stars in fairly typical environments of the universe that have been invisible up until the James Webb Space Telescope,” added Reiter. “Now we know where to look next to explore what variables are important for the formation of Sun-like stars.”

This period of very early star formation is especially difficult to capture because, for each individual star, it’s a relatively fleeting event – just a few thousand to 10,000 years amid a multi-million-year process of star formation.

“In the image first released in July, you see hints of this activity, but these jets are only visible when you embark on that deep dive – dissecting data from each of the different filters and analyzing each area alone,” shared team member Jon Morse of the California Institute of Technology in Pasadena. “It’s like finding buried treasure.”

In analysing the new Webb observations, astronomers are also gaining insights into how active these star-forming regions are, even in a relatively short time span. By comparing the position of previously known outflows in this region caught by Webb, to archival data by Hubble from 16 years ago, scientists were able to track the speed and direction in which the jets are moving.

Dr Haworth said: “More research needs to be done in this area.  Future observations will allow quantitative analysis of the velocities of these new star flows. As a relatively modest region of massive star formation (larger than Orion but smaller than starburst clusters), this analysis offers a preview of what star formation studies with the James Webb Space Telescope may provide. It is a huge step forward for us.”