A study of how dung beetles survive deforestation in Borneo suggests that species with more competition among males for matings are less likely to go extinct, according to research led by scientists from Queen Mary University of London and Nanyang Technological University, Singapore. 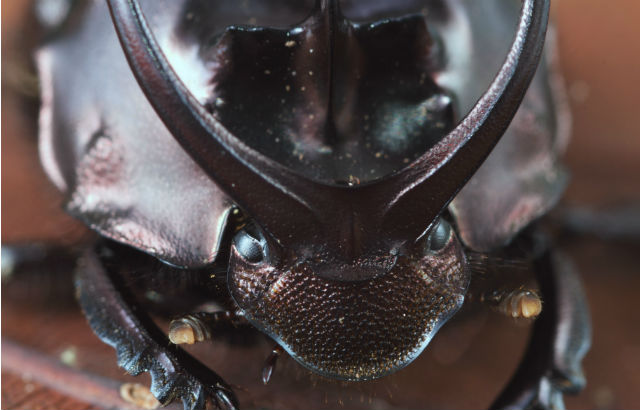 The team followed 34 different species of tunneller dung beetle in the tropical rainforest of Sabah in Malaysian Borneo. These are similar to the familiar ball-rolling dung beetles but they bury dung directly under the place where it’s deposited. Some of these species have males which compete intensively for access to females and which carry horns which they use in fights with rivals, whereas other species have less competitive males which don’t fight each other and which don’t have horns.

In the study area, 34 of these beetle species are found in pristine “old-growth” forest, and the team tracked each of them across a gradient of increasing environmental disturbance going from the old-growth forest, to lightly logged forest, then heavily logged forest and finally oil palm plantations where the original forest has been almost completely replaced.

The results, which are published in the journal Ecology Letters, showed that species with horns were more likely to persist in the disturbed environments than were those without horns, and in the most disturbed environment, oil palm plantation, all of the 11 species that remained had horns. Furthermore, the researchers found that among the species with horns, those with relatively large horns for their body size were more likely to persist and had larger population sizes.

Dr Rob Knell from Queen Mary University of London said: “Strong sexual selection, in this case, competition between males, means that some males “win” and father a large proportion of the next generation. When a population is stressed by changes to the environment the winning males can be the ones best adapted to the new environment, and this can boost the rate by which the population adapts to the new environment, making them less likely to go extinct. This is something that has long been predicted theoretically but it is the first time that this effect has been shown in the field.”

Dr Eleanor Slade from Nanyang Technological University in Singapore added “This tells us that if we want to understand how animals can adapt to changing environments then we need to think about their mating systems as well as other aspects of their biology. Understanding which species may be particularly prone to extinction after environmental change is important when evaluating species conservation status and management practices.”

Sexual selection describes the process by which members of one sex compete with each other for access to members of the opposite sex. It is ubiquitous across the animal kingdom and drives the evolution of traits such as sexual ornaments and weapons, which give advantages to individuals in competitions for mating. While these traits can benefit individuals, the effect of strong sexual selection at the level of the  species is less clear. There are several ways in which sexual selection might actually increase extinction risk. These include the cost of growing and carrying sexual ornaments and weapons, the energetic expense and risk of injury from contests with rivals, and the risk of predation during conspicuous sexual displays.

These traits are also, however, indicators of an individuals’ condition and can reflect underlying genetic quality. Strong sexual selection can therefore enhance the spread of beneficial genetic variants by the mechanism explained above potentially reducing extinction risk.