Jerry Brotton, Professor of Renaissance Studies at Queen Mary University of London, has co-curated an exhibition, Talking Maps, which celebrates maps and the stories they tell about the places they show and the people that make and use them. 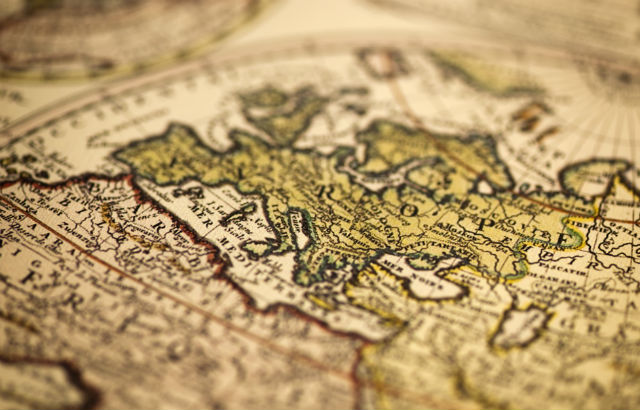 Photograph of an ancient map of Europe

The exhibition, based in the Weston Library of the Bodleian Libraries in Oxford, showcases iconic treasures from the Bodleian’s world-renowned collection of more than 1.5 million maps, together with exciting new works on loan and specially commissioned 3D installations. Featuring ‘imaginary maps’ such as Grayson Perry’s Red Carpet and Map of Nowhere and JRR Tolkien’s maps of Middle-earth, the exhibition offers a new perspective on the enduring power of maps.

Every map tells a story

Talking Maps explores how maps are neither transparent objects of scientific communication, nor ideological tools, but proposals about the world that help people to understand who they are by describing where they are.

The exhibition also shows how cities are administered using maps, and how they can also be used to deceive its attackers; how maps are used in war, and drawing national boundaries; and how artists can use them to reflect on the state of our nation in light of Brexit. Others provide routes to religious salvation, while online interactive maps show us the global and environmental challenges we face in the 21st-century.

Professor Jerry Brotton said: “Every map tells a story. The exhibition shows how maps are creative objects that establish conversations between the people who made them and the individuals and communities that use them.”

Nick Millea, Map Librarian at the Bodleian Libraries added: “Maps do so much more than simply getting us from A to B. Talking Maps highlights the diverse and surprising role of maps through the ages, from guides to the afterlife and windows into alternative worlds to tools that have been used to manage land, nations and empires.”

Highlights from the exhibition

The exhibition brings together an extraordinary selection of ancient, pre-modern and contemporary maps drawn from a range of cultures and in a variety of formats. Some are made of animal skin, some woven in wool, others made from the leaves of coconut trees, and the exhibition also shows how maps have migrated from paper to pixels in recent years.

The exhibition also features items that have never been publicly displayed before including NewcastleGateshead, a photomontage map by the acclaimed artist Layla Curtis; a surviving fragment of the Sheldon tapestry map of Gloucestershire, one of a set of four 16th-century tapestry maps; and a Tibetan thangka—a Buddhist ‘map’ showing the path to personal enlightenment.

Other exhibited items include Grayson Perry’s tapestry, Red Carpet (2017), designed to express the state of the nation following the Brexit vote and his etching Map of Nowhere (2008) which explores his own belief system. The iconic Gough Map (late 14th-century), the earliest surviving map showing Great Britain in a recognizable form is also among the collection.

Catriona Cannon, Deputy Librarian at the Bodleian Libraries, said: “The unparalleled historical richness and cultural diversity of the Bodleian’s map collection make it one of the greatest cartographic collections in the world, and it is growing daily. Talking Maps invites visitors to come and enjoy the fascinating tales that the collection has to tell and to see some stunning maps on loan from twenty-first-century artists and map-makers.”