Queen Mary, University of London has secured two of the 10 winners of a national talent competition to find young academic broadcasters, run by BBC Radio 3 and the Arts and Humanities Research Council (AHRC). 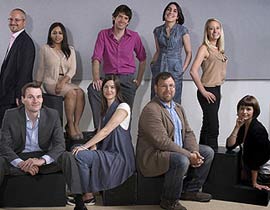 Dr Rachel Hewitt and Shahidha Bari, were both selected from the Department of English, making Queen Mary the only university to have achieved a double win in the ‘New Generation Thinkers’ scheme.

Shahidha is currently researching the Arabian Nights, both their interpretation in Western literature, and also the stories themselves and what they tell us about notions of Arab identity.

“It feels very special to have been selected,” Shahidha says. “There's something very intimate about inviting people into your thoughts, persuading them that they should be as interested and intrigued as you are about the things you're discovering.

“It feels especially important to be able to do that now when budgets for research into the arts and humanities are being cut.  This is the time to show how important academic research can be.”

Rachel Hewitt, who is also author of Map of a Nation, a history of the Ordnance Survey Map, will be exploring an alternative narrative of Romantic-era Britain.

"My next book, A Revolution of Feeling, is a biography of the 'inner life' of 1790s Britain; the emotional trajectory of the British left-wing from feverish hopes invested in the French Revolution to a climate of crushing disappointment.

“Like Map of a Nation, this next book will be aimed at a wide readership:  I write as a biographer and a cultural historian, and I try to focus most on good writing and clear communication. I'm so excited that the ‘New Generation Thinkers’ scheme is celebrating the crossover from academic to ‘general writing’."

Head of English at Queen Mary, Dr Christopher Reid, welcomed the news, saying: "The Department of English is very proud of  the role it is playing in bringing forward a new generation of distinguished and articulate scholars. Shahidha Bari is a Lecturer in Romanticism and Rachel Hewitt an Early Career Fellow in the department and we are delighted at this endorsement of the quality, range and public impact of their research.   We will certainly all be listening to their programmes on Radio 3."

Launched in November 2010 at Radio 3’s Free Thinking Festival of Ideas, the ‘New Generation Thinkers’ scheme invited applications from university researchers at an early stage of their career, passionate about broadcasting their ideas to the general public.

The competition received over 1000 applications, and after a six-month selection process, this was whittled down to the final 10 by a judging panel of BBC Radio 3 producers and AHRC academics.

The winners will now work closely with BBC presenters and dedicated mentors from the production team at Night Waves - Radio 3’s arts and ideas programme (Mondays to Thursdays 10.00-10.45pm).

Each ‘New Generation Thinker’ will then have a unique opportunity to develop and broadcast an idea inspired by their research on Night Waves between Tuesday 28 June and 13 July. Winners will also deliver talks at Radio 3’s annual Free Thinking, Festival of Ideas at the Sage, Gateshead, in November 2011.

Matthew Dodd, Head of Speech programming, BBC Radio 3 says: “The response from scholars has been overwhelming – and the quality of their proposals a revelation.  ‘New Generation Thinkers’ will introduce Radio 3’s audience to charismatic new voices and fascinating areas of contemporary research.”

Professor Rick Rylance, Chief Executive of the AHRC says: “We are delighted at the runaway success of this scheme and the quality of those who applied for it. It indicates the depth of talent among the new generation of arts and humanities researchers and the appetite they have to communicate their knowledge and enthusiasm. The successful 10 had to beat off exceptionally strong competition and I look forward to following their work on air.”

The other ‘New Generation Thinkers’ for 2011 and their specialist subjects are:

The judging panel consisted of the following people:

The Arts and Humanities Research Council (AHRC) supports research and postgraduate study in the arts and humanities, from languages and law, archaeology and English literature to design and creative and performing arts.

The AHRC makes research awards every year ranging from individual fellowships to major collaborative projects as well as over 1,100 studentship awards. Awards are made after a rigorous peer review process, to ensure that only applications of the highest quality are funded.